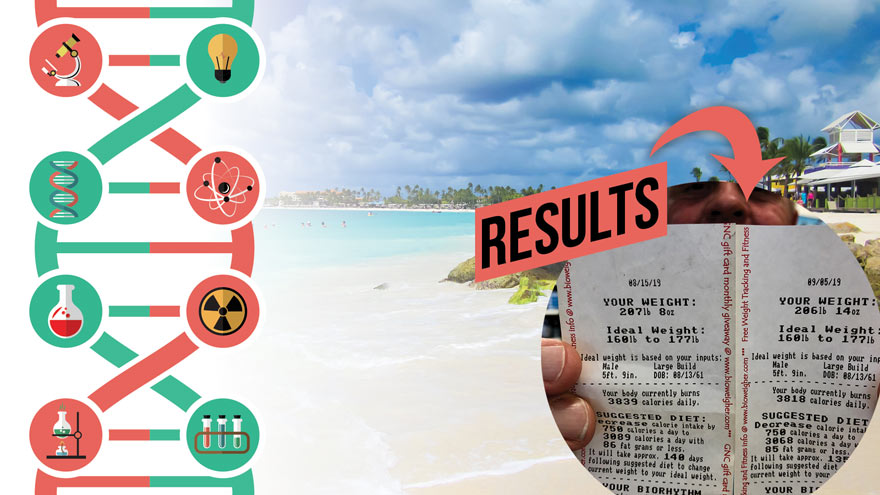 Optimized Metabolism: How to lose weight after 17 days of massive overeating

Have you ever considered that you can train your metabolism?

If you have, think about this, as well: what would it look like if you did this for years and years, and your metabolism just became more and more optimized?

I want to talk about that in this article. I recently took a vacation in Aruba and conducted a little “experiment” to see what would happen. Before I get to that, let me make a quick note about metabolism.

Most people think about metabolism in terms of “fast” or “slow.” Instead, I prefer the terms “optimized” or “compromised.”

This is because it’s not just about speed. Metabolism is more complex than that. For example, It’s possible to take a “fast” metabolism and “compromise” it in such a way that you have no energy, your workouts just knock you on your butt, your hunger/satiety loops are all out of whack, and you can’t seem to stop snacking or gaining weight. You could imagine someone in this scenario who, technically speaking, still had a resting metabolic rate a few percentage points higher than normal, given their weight, height, and age. But is there metabolism optimized? Are they happy? No.

Forget a one-dimensional focus on “speed.” Your metabolism is either optimized or compromised. Understanding this helps explain why so many people gain weight even though they feel like they’re doing everything “right.” Their metabolisms are compromised.

When you have an optimized metabolism, everything is more forgiving. An optimized metabolism makes it very difficult to gain fat permanently, especially after cheat days or extended cheat days (e.g., on vacation). You don’t crave things you don’t need. You have energy. You feel like a furnace when you do overeat. You sleep well. Your mood is good.

When with a compromised metabolism, on the other hand, it can seem as though even the smallest diet indiscretions lead to unwanted fat gain. A compromised metabolism also affects you psychologically. This is why and how it feels like you’re always hungry, but still gaining weight. You can’t stop thinking about sugar. Maybe you feel cranky. This feedback loop between psychology and physiology is why the North American diet mentality is so dangerous.

The key point I want to make is that whether you have an optimized metabolism or a compromised metabolism depends on how you’ve trained is over the long-term.

How have you fed our metabolism or starved it? How has your health been? Your sleep? Your exercise? This is a long-term thing. It takes place over the “cumulative” phase of the metabolic compensation system. In other words, this is the phase where what you do to your body adds up over time.

My Metabolic Experiment in Overfeeding

Now, for years I have posted pictures or videos of my various cheat days or cheat/refeed day meals when describing the benefits of Cycle Dieting underfeeding with overfeeding.

I’ve even posted images of coaching clients who’ve benefited from longer-term metabolic optimization via the Cycle Diet, like my client J.P.:

But this year I set out to do something a little different. I wanted to do a bit of a metabolic experiment.

Every year I vacation in Aruba. I take time off my regular and regimented diet-strategy and I make food indulgence part of my vacation experience. I always have.

I decided to do this:

I called this my Metabolism Experiment in Extended Overfeeding, and at the end of it all, even I was blown away by the result.

So, before leaving for my vacation I weighed in at GNC, since I don’t even own a weight scale and never will:

Now, although I have been practicing The Cycle Diet diligently for decades it has been many years since I’ve deliberately aimed to over-eat for an extended period of time. I’m not as young as I used to be! Being 58 years old, the reality is that my metabolism is slower and less resilient than it was 30 years ago.

This is why I expected that I would gain some weight. Age is a factor, and even when I was young, I would often be up a couple pounds whenever I took two weeks of diet and training, but would be back to normal about a week later.

My plan was therefore to see how much weight I would gain now, at 58 years old. Since I expected to gain at least a bit of weight, I planned to explain the difference between water weight and actual fat weight. Water weight can be very labile, or unstable. It’s not important. In fact, some water weight can make you look better. (For example, there is glycogen storage in muscles that, for many cycle dieters, just makes them seem fuller and leaner, even though they’re technically “holding more water.”)

I fully expected a certain amount of “weight” gain from deliberately overfeeding for 17 days. I was even taking notes so I could explain it, lest people misunderstand and think that gaining a few pounds of water weight was somehow a failure.

I must admit that even I was curious to see 1) how much weight I would gain and 2) how long my weight would take to return to normal.

The Overfeeding (the fun part)

For 17 days I deliberately overate.

I went out of my way to choose more calorically dense foods.

The only limitation I set is that I would not directly eat animal flesh or dairy (but if there were animal-based ingredients in some of my food choices, then so be it—I was enjoying myself).

On my return from Aruba I got back on my regular diet-strategy for three days; then, on the morning of the fourth day we did a follow-up first weigh-in.

So, what happened? Well, the results even blew me away!

Here is a video of the weigh-in:

Here are a couple pictures side by side of the two weigh-in results: 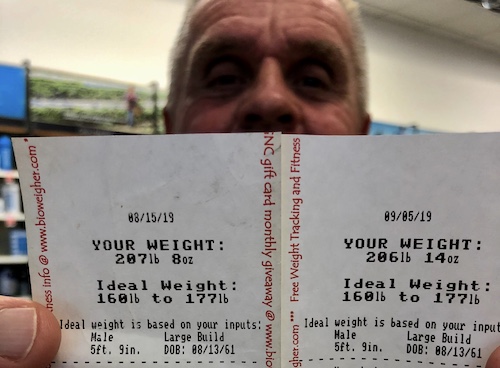 So after 17 days of conscious and deliberate overeating, and only 3 days back on my regular diet-strategy… I LOST A POUND!

Now, let me first say that I’ve been doing this for 40 years. Not much surprises me anymore. But honestly, this does, because it shows how much weight control is about more than just diet. You also have to think about metabolism!

How to Train an Optimized Metabolism

I will talk about a few specific lessons in the next article, but I want to set that up by explaining an overarching lesson about the importance of the long-term, cumulative realm of time for metabolic health, metabolic optimization and resilience.

I also, of course, want to point out just how significant a trained metabolism is for weight-control.

A lot of trainees are focused on this or that diet to lose weight, or to bulk up, or to be healthy, or whatever. Some talk about metabolism, but very few are talking about properly programming metabolism in a way that lasts a lifetime.

Moreover, very few are talking about how a compromised metabolism leads to struggles with weight and with diets and with age-related weight-gain and all the rest.

There are a gazillion ways to lose weight, especially in the short-term.

But many of those fancy diets can actually lead to an eventual compromised metabolism, not an optimized one.

For example, if you break down a typical yo yo diet into the three realms of time, here’s what happens:

You lose a few pounds, but it’s mostly water weight because you’re eating low-carb. You feel good at this point, as though you could do this forever. Diet hoaxes about “7-day quick starts” and things take advantage of this.

Weight loss slows, then might even stagnate. Hunger and cravings climb up while energy goes down. Eventually, this can’t be maintained, so you start to gain the weight back.

All the weight — and sometimes more — comes back. (This is where you see all the stats about how most people don’t just fail to keep the weight off after a diet; on average, they gain a pound after a diet.) Maybe hunger doesn’t return 100% to normal. Psychologically, you’re also extremely frustrated. If you’ve done something really extreme, you’ve lost muscle, which would affect not just energy expenditure from movement and exercise, but would also affect even your resting metabolic rate.

In the worst-case scenario, the dieter tries to do it all again, and it gets just a bit more difficult each and every time. They might also develop food and eating issues. They become obsessed with macros and number crunching because these things offer an illusion of control, when really the dieter feels helplessly out of control.

However, there’s another way. That’s what I’m trying to tell you.

By focusing on metabolism first and diet and weight second, you can get to a place where you can stop all the worrying, all the number-crunching and macro-mania, all the debates about carbs and all the rest.

Again, let me go back to the results of the experiment. I overate for 17 days and my metabolism forgave me.

The reason I had the results I did is that I’ve been training and eating in a healthy way for 30 years. I’ve been focused on optimizing my metabolism for 30 years, and I’ve had fun doing it. I don’t have stress hormones being released whenever I think about this stuff. These things matter.

This extended overeating experiment result is important evidence that a metabolism can be trained to be optimized, and it’s really not as complicated as the industry would lead you to believe your whole life.

But again, the trick is that it doesn’t happen in 14 days or whatever. It’s about focusing on that long-term, cumulative realm of time.

However, my books Lean Without Trying and Metabolic Damage are also important. I also, of course, recommend online coaching if you don’t want to try things on your own, and just want me to work with you one-on-one, while providing accountability and specific tweaks. I will also lay out the most important physical elements in my next article, and then after that, I’m going to spend a whole article about the psychology of it.

For now, let me close by asking you to think about the importance of the cumulative realm of time. Think about some of the ways in the past you might have sacrificed longer-term metabolic health and resilience for shorter term results.

What could you do instead?

What would be a better way?