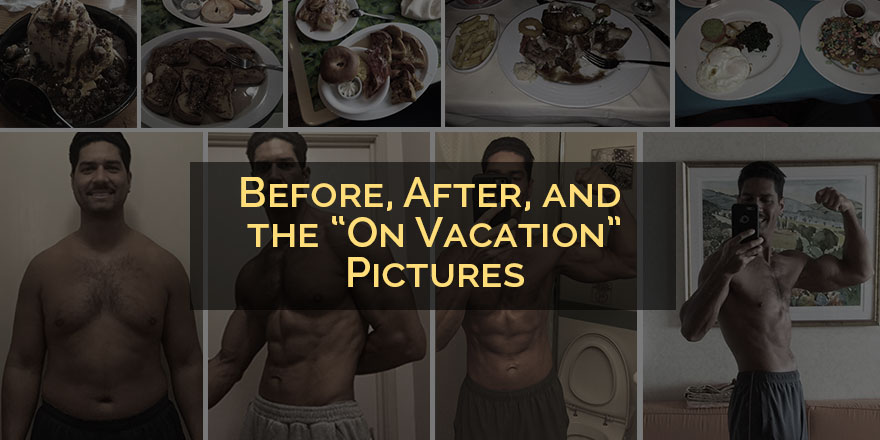 Before, After, and the “On Vacation” Pics

Anyone who has been involved in fitness for more than a week has seen plenty of before and after shots. Sometimes these are amazing. Sometimes they are misleading. I’ve remarked in several of my books that many before and afters would be more accurate if they showed before pictures, twelve weeks later show after pictures, then 8-10 months after that; show the “after the after” pictures.

Well here is one such set of comparison shots, from my client J.P. whom you heard about it a previous blog post.

I’ll show you the shots, then I’ll talk about why they’re even more impressive than they look.

Here are JP’s original “before and after.” Pictures – dramatic yes, but this isn’t where the story ends. 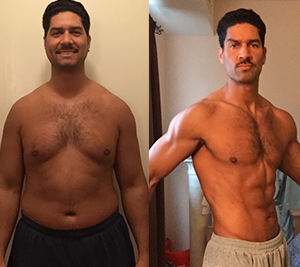 Well, here he is a few months after that (October), with a few more “before & afters”!!!

These before and afters are a little different from the usual ones.

What’s really important about these final recent shots you see above is that J.P. sent me these while he was on vacation, and therefore he was completely off diet and training (as I instruct most of my clients to do). The photo on the left represents the start of the vacation, the “before,” and the photo on the right represents him enjoying himself on his cruise.

With Christmas coming up, I think this blog post is more relevant now than ever. I believe everyone should ENJOY their time with family, and YES that includes eating and having some food indulgences. JP is representative of the “after the after” pics indicative of keeping dramatic transformative changes (and enjoying the benefits of such changes, as now his metabolism is more “optimized”). This is the where, why, how and ABC’s of why Coaching is so relevant for long-term accountability and more.

People ask what the “real” benefit is of ongoing coaching, or they say they don’t “see” the benefit, or that they can just “do it themselves.” Here is the benefit: Instead of barely reaching a transformation and/or dying to achieve it, you make a remarkable, but REAL transformation, you sustain it, and then you build on it.

JP doesn’t “think about” diet and training all the time. He just gets my programs, and does them. Yes, of course he asks questions and gets clarifications. Smart people, and my best clients, ask questions and make sure they’re on the right track. That is why they succeed. Sometimes, as his coach and as I talked about in a past blog post, I might identify ways his mindset can “re-frame” certain ideas or “obstacles.” JP succeeds because he listens, and he gets it down. But he also succeeds because he has a Coach that can get him thinking in ways he would not consider if left on his own and inside his own head. Don’t forget, inside his own head is how he ended up in the “before” shots to begin with. Many of you never even consider these things. Hence, why so many of you never sustain a physique transformation either.

The Role of the Cycle Diet

JP has also been on a version of my Cycle Diet for a little while now. And it took him some time to get there into supercompensation mode. Remember that first you have to get lean, as JP clearly did.

But note that with JP it was tweaked. JP hasn’t even progressed to the full cheat day or cheat day and a half. People who’ve spent a fair amount of time overweight have to edge in slowly to refeed/overfeed days. Again, this is the benefit of coaching—making this decision yourself is very difficult. Your mind plays tricks on you — if there is a “weakness” to the Cycle Diet, that would be it. It often requires an outsider’s perspective.

But JP got to go on a vacation and go off his diet and enjoy everything the cruise had to offer. Do YOU think it hurt him??? Those last photos are from him during his cruise.

The strength of the Cycle Diet, of course, is that it is metabolism first, weight loss second. This means the goal at this point isn’t to get JP “even leaner” necessarily. (Why would it be?) Rather, the goal is to optimize his metabolism so that times off diet and/or training have no negative effects, and JP can go out and FULLY enjoy life.

Another thing to note: many of my clients who are deep into Supercomp get a two full weeks off diets if they are on vacation. Because of JP’s biofeedback, the notes I have on his background, and so on, he only had 1 week off training and diet for his cruise. I certainly didn’t restrict him at all on his cruise, but I knew that he didn’t “need” more time off than the cruise he already had scheduled. If he’d continued eating another week totally off diet, his “after” pics might have looked very different (though that “labile” element of water weight would have come off very very quickly in JP’s case).

Here’s a few excerpts from JP himself – from his check-ins after the cruise, with my comments in red (the actual ones I gave to him — my coaching clients will recognize this format, LOL):

As already mentioned, two weeks ago I took an entire week off of dieting, as well. I ate a ton, and a huge variety of foods (I’ve attached a pic or two of a typical meal….but, keep in mind that what’s in the pics were simply the “first batch” of what usually was a meal consisting of three or four “helpings”).LOL I ate that way every day for that entire week. What I found interesting is that I really didn’t feel many “spike/refeed side effects”; other than feeling justifiably full at times during the day or by the end of the night, I didn’t experience any bloating, nausea, diarrhea, no constipation, nor “carb coma”. AWESOME !!! That’s great, You are obviously “deep” into Supercomp mode then It’s as if my stomach and digestive tract were receiving all of that indulgent goodness of food with open arms! However, I was, indeed, hot throughout the night, including sweating yes, increased thermogenesis. Another great sign of being hyper-metabolic. Kicker is that I continued to remain hot at night in bed at least an extra three or four nights AFTER having went back on my diet protocol. yes, that’s right of course (I hope that’s a good sign?)

Coach, although I LOVE it when I get to eat like that, I actually wouldn’t want to eat that way EVERYDAY. of course not. And I think this is one of things the CD teaches the mind. When most dieters diet, they think they can’t have this or that food, and they start “romanticizing” food and taste and all. But with the CD you get a sort of perspective on it. You can enjoy indulgent food then leave it alone I like going back to healthy eating, good whole foods, small meals every 3-4 hours, etc…..crazy as it may sound.not crazy at all

The fact that when directed by you to indulge at the right moments “does my body good” allows me to enjoy BOTH sides of the “proper-eating coin” (the eating healthy most of the time coupled with the properly timed spikes). which gives you a psychologically healthy approach to food and nutrition. And its why as you said above, you wouldn’t want to eat like that every day. Because you have a “perspective” about it

Based on that mindset, I have no doubt that JP will continue to optimize his metabolism even further, which is as you can see already getting more and more robust and optimized. Not to mention he’s putting on the quality muscle that he’s always dreamed of. Now HE IS the guy that friend’s and family are asking for advice on training and diet!

By the way, here are some pics he sent of what he ate!