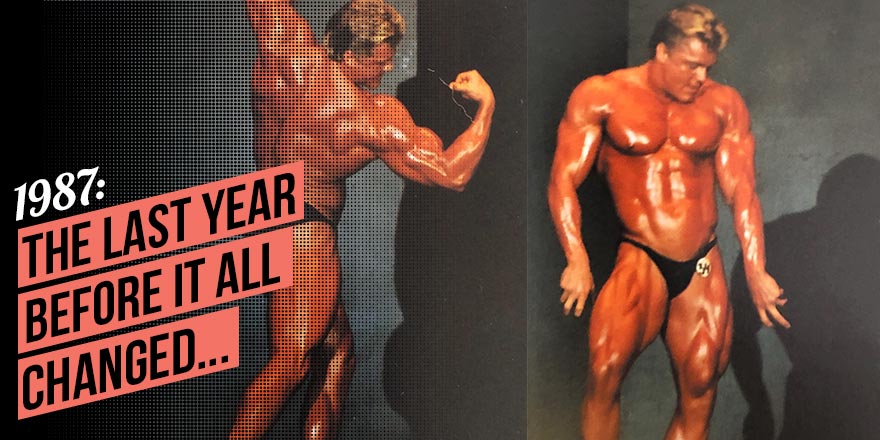 1987: The Last Year Before It All Changed

Note: If you haven’t been following along my career retrospective article series, you may want to go back and check out my 1983, 1985, and 1986 previous entries.

1987 was one of the most important years in shaping my career trajectory—but mostly because of the non-bodybuilding-related influences in my life.

In the fall of 1986 I’d gone back to university to pursue a master’s degree in sociology. I was swept up and swept away by academia. It was almost romantic, for lack of a better word. Being exposed to great thinkers and writer opened up my mind further than it had been during undergrad.

Being so immersed in the academic world prevented me from becoming as deeply immersed in the bodybuilding sub-culture as I otherwise might have. That probably saved my life, and it definitely altered my career trajectory for the better. I was involved with the bodybuilding subculture, but academia kept me from getting too involved in that subculture.

I was a student in academia and I was teaching classes and grading papers. Bodybuilding was my vocational outlet, but academia made me tick on a deeper level.

My very first mentor was my academic advisor for my master’s thesis. She helped me make sense of my life. I looked up to her, and there are still few people whom I look up to as much as I do her.

I was especially torn about the whole steroid thing. I could see that the steroid world was changing rapidly – and not for the better. The fear of drugs was starting to dissipate, and so the list of drugs guys were taking was getting longer and longer, while the doses were also getting crazier and crazier.

I would like to tell you that I was not part of that, but I was — even though it took me years to admit that to myself.

Anyway, while I was away at university, I heard, through the grapevine, about some of the new up-and-comers. I also heard a rumor about me. Apparently, I learned from someone back home, the gossip about me was that I was only going back to university to take advantage of OSAP—the Ontario Student Assistance Program—for the upcoming competition season.

OSAP was a financial aid program for students to go to university – some of the money was in the form of loans, and some of it in the form of grants.

Well, I didn’t know this at the time, but various bodybuilding competitors were taking advantage of it and OSAP had earned new nickname in the bodybuilding community: the Ontario Steroid Assistance Program.

Bodybuilders were signing up for school to get grants and loans to fund their steroid stacks; then, they’d quit school as soon as they had actually secured the money. This was how much and how quickly and how wildly the steroid landscape had changed since the naïve users of just a year previously.

I also learned, through the grapevine, about the new champions in town. The big Great Lakes Open Championships was coming up in early 1987 and every one was going to compete, including this new up-and-comer.

I ended up talking to this new guy. He was always talking to me as if he’d feel sorry for me if I competed in this show. He talked like I wouldn’t have a chance against him, and against the new local talent. Given all that talk, I’ll admit I genuinely didn’t know what to expect come contest day.

It would still take me a few years to learn that talk is cheap, and those who talk the most tend to have the least to say—especially in bodybuilding circles!

I started preparing for the show.

Let me point out here that I used a carbs-based diet, just as I always had, beginning with my first contest back in 1983 (where I’d lost over 50 lbs in 12 weeks). A carbs-based diet would be the one constant of my career.

If something ain’t broke, you don’t fix it!

In this latter regard, I believe my education was starting to teach me what was worth paying attention to and what wasn’t!

Speaking of education, my training partner for this contest was a PhD student in engineering. Later, the press would eat up stories like this, as they helped dispel the myth of the all-brawn, no-brains bodybuilder stereotype. Here were two graduate students hangin’ ‘n bangin’ for bodybuilding glory.

I showed up and I won my weight class handily. That up-and-comer who felt so sorry for me? He didn’t even place. One of the other new legends in town didn’t fare any better. It really was all talk.

Now, I won my weight class – and that was probably important for my reputation at the time – but I didn’t win the overall championship this time around.

The fact that I didn’t win the overall didn’t seem to matter to the rumor mill, especially given my progress since 1983, when I’d weighed in at 154 lbs. Now, in 1987, just four years later, I was weighing in at 235 lbs. That was an 81 lbs difference.

Even though I didn’t win, that level of progress became extremely, extremely important for my career and my reputation. 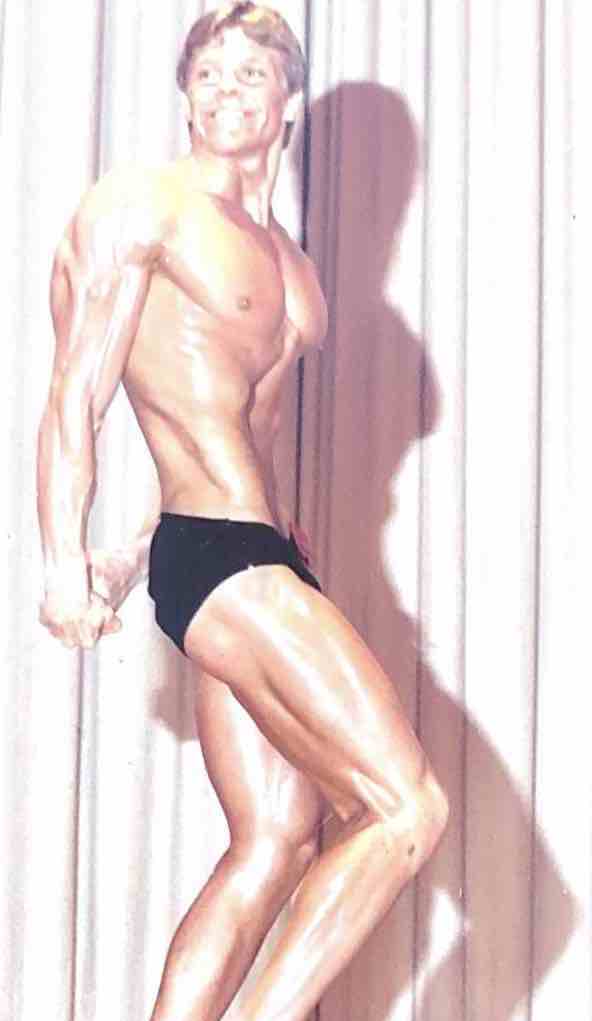 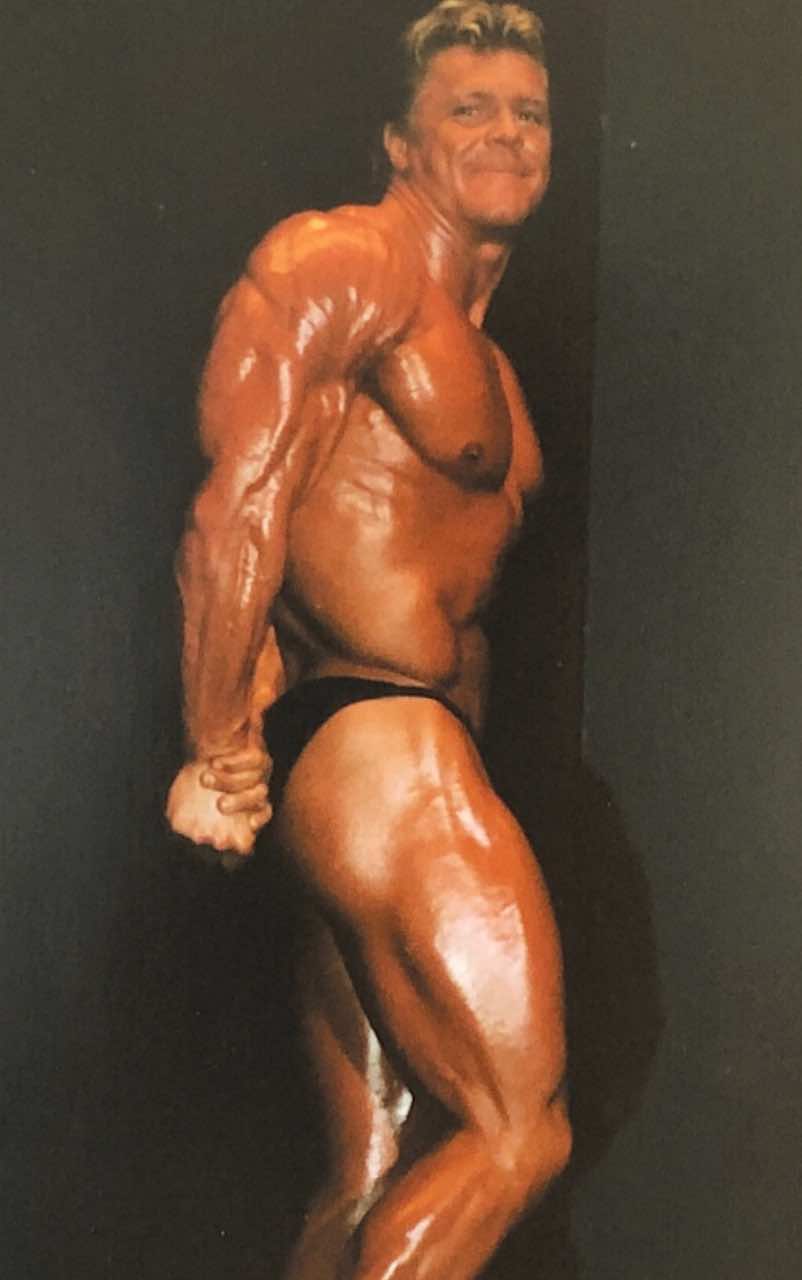 Knowledge and know-how was winning out.

So… why didn’t I win the overall?

Well, for one, my posing routine almost got me disqualified. Back then posing routines were to be limited to 90 seconds. My posing routine went on for almost four minutes, because I did a very, very sexually charged routine set to Bruce Springsteen’s son, “Fire.”

The head judge I learned, wanted to disqualify me. I was later told the reaction to my routine was too overwhelming.

Again, physique as performance art was important to me, and so I’d wanted to tell a choreographed story. Also, at that time very few competitors were hitting glutes shots; well, I was one of the first to lift my posing trunks and do that as well. The audience that liked being entertained went nuts for it; but a few of judges were more outraged than anything else (even though that kind of thing would become common in a few short years).

I include the link to the posing routine here. It’s grainy because this was before the days of HD and smart phones. You can barely hear the music because of the audience, but you will get the idea.

The reaction to the contest was more intense than before. Contest promoters and managers were trying to get a hold of me, either through the gym in my home time, or through the university. Some of the people calling didn’t even know my name, they just asked, “Are you the guy that did that posing routine in London?”

(You also have to remember, this was 1987. If you wanted to contact someone you had to do it the old-fashioned way.)

One day the sociology department called me in to the main office to tell me they can’t keep fielding calls for me in the department office. I told them I had nothing to do with the calls, and they understood.

I also started getting offers to audition for movies and modeling contracts. Some people wanted to “brand” me. I rejected that idea, which was probably extremely stupid in retrospect.

However, all I wanted to do was get back to working out and studying. In terms of bodybuilding, I still had the goal of making physique performance art a thing.

Let me close by saying that I look at photos of me from this contest and I think this represents the best of what it all could have been—before it spun out of control. 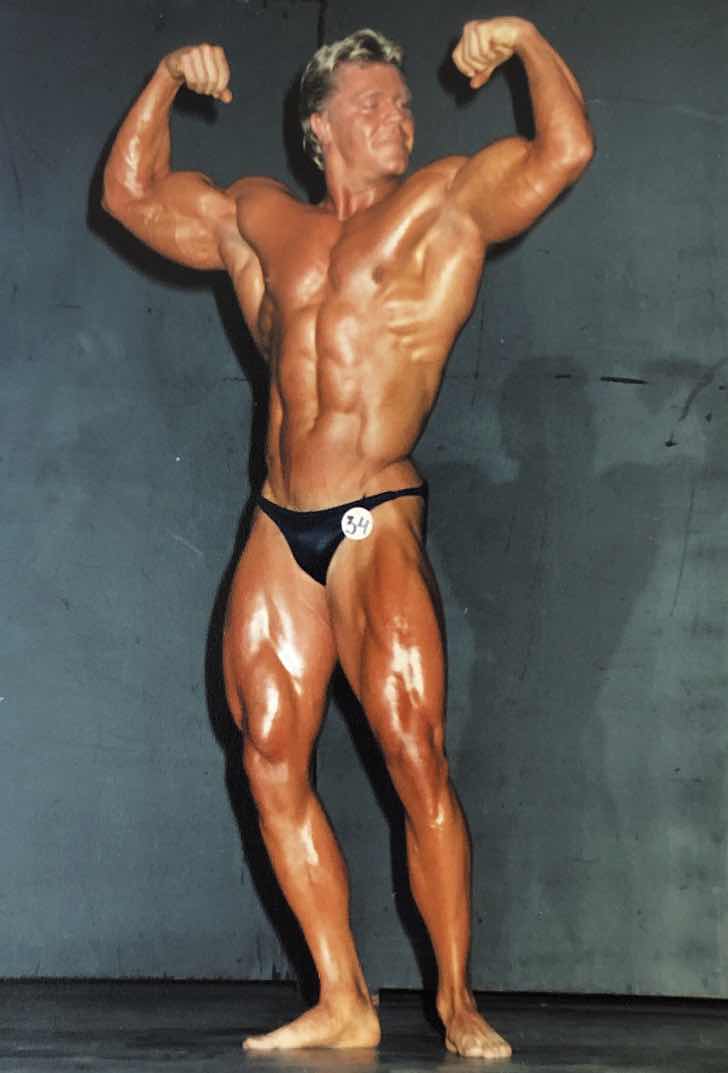 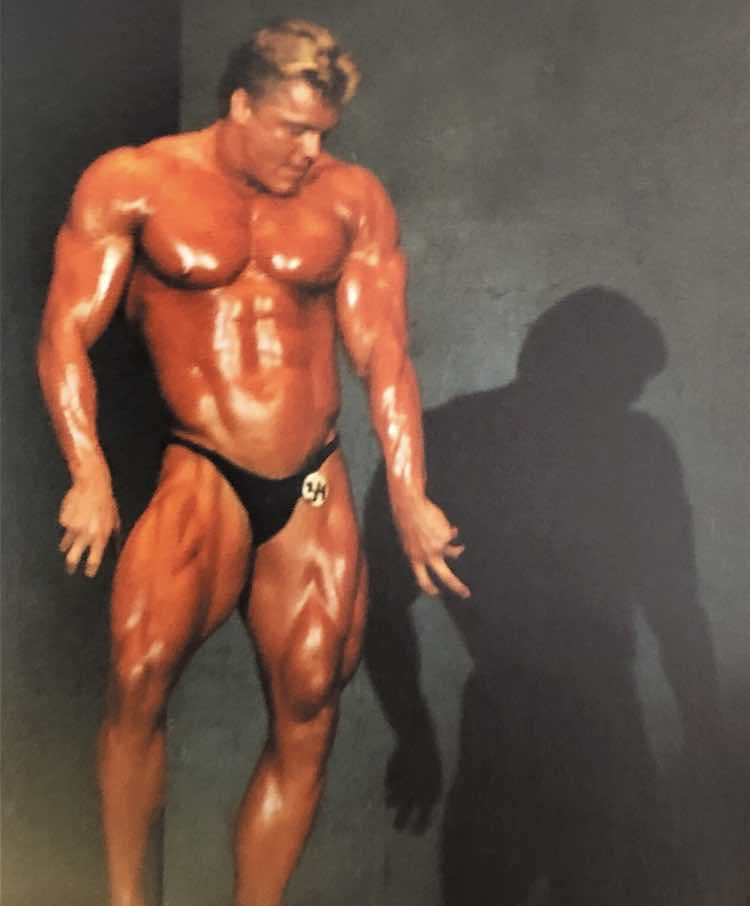 Yes, steroids were there and we used them, but the physiques were still aesthetic and appealing. I look at pictures a few years later, when I was at 260 lbs., and I ask myself, “What was I thinking?”

I think, for me, the late 80s were the best I would ever look. By the changing standards of the hardcore bodybuilding world I would continue to “improve” for several more years to come, but again, when I see those changes, I just return to that question: What was I thinking?

But that was still away into the future.

Next up is 1989, the year that changed everything for me!