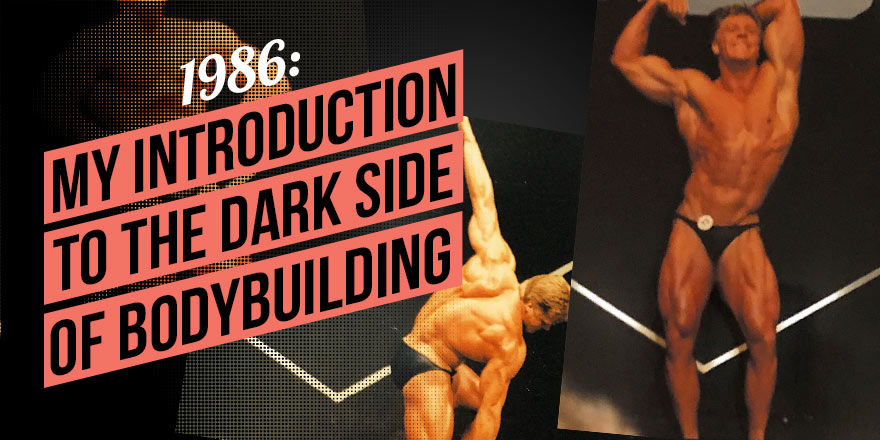 1986: My Introduction to the Dark Side of Bodybuilding

This post is the third in a retrospective series. Read the first and second posts.

When I think of 1986, the first thing I about is how the trophies started changing.

In short, bodybuilding was changing. It seemed to be catching on and growing in popularity.

I don’t have any of those trophies to show to you now. I got into the habit of giving my trophies away to whoever was my training partner at the time. I always felt they deserved some symbol of recognition of effort as much as I did. Plus, staring at trophies collecting dust represented living in the past, and I didn’t want to be that Bruce Springsteen ‘Glory Days’ guy!

In 1986 I was devoting more and more time to my fascination with the human body and with athletic performance.

To that end, I took the weekend shift as often as possible at an in-care living facility group home for troubled teens. (To tell the truth, most of them were only “troubled” by really bad parenting. And most of the time it was the parents who should have been removed from the homes. But, I digress…)

I loved this job and my coworkers, and I cared for and loved the kids under my watch. But I took the weekend shift because it allowed me even more real time to pursue bodybuilding. The weekend shift was 8:00 am all the way to midnight for both Saturday and Sunday, and you got paid to sleep over as well, making for a 40 hour work week in two days.

This shift was also easier because many of the kids would be on weekend passes spending time with their families, so there was way less commotion to deal with. And for the kids that stayed behind, since it was the weekend, I was often allowed to take them to the gym, and that always felt to me like I was setting a good example for them by getting them exposed to fitness and more constructive pursuits for venting their energy.

I also applied to go back to university to pursue my master’s degree. I was accepted, and offered both scholarship money and two different tutorialships, which made it a no brainer to head back in the fall.

But I still had that bodybuilding competition itch to scratch and competing in 1986 would prove an important year for me and my career. 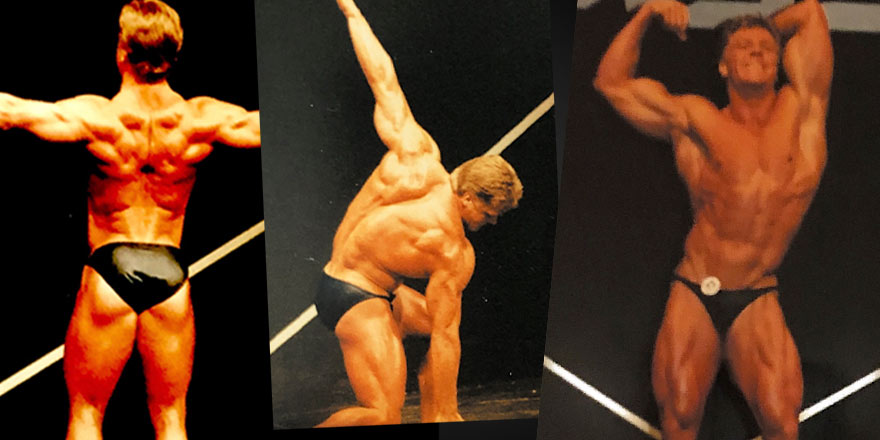 I was much bigger, for one.

In the competition I entered, I won both my division and the overall, as well as best poser. The local newspaper put me on the cover of the sports section, and cable TV covered the event.

But not everything was the same this time. There was indeed a shift in the force.

The 1986 competition marked my first foray into using performance enhancing drugs. That is, steroids.

Having now been involved in that world for a long time, I can say two things. First, I did this with extreme caution, relatively speaking. Second, even more generally, the doses back then would be a joke by comparison to what would go on in the sport just a few years later.

For instance, by the time I retired, female figure competitors were taking more drugs and in higher amounts than what I’d taken to step on stage above 200 lbs. and win, back in 1986.

I’m discussing this to contextualize things along a longer timeline. Bodybuilding was changing, in short, even on a local level. It hadn’t gotten to where it would eventually go, but it was changing.

And my passion for the sport, combined with my uninformed naiveté, meant I was blind to some of the changes.

I was blind to the fact that this was, when you get right down to it, my introduction to the “dark side” of the force—a side that was changing and growing.

Even in my own early days of training, back when I was still in a powerlifting gym, steroids were only discussed by a few very advanced powerlifters, and they were a very closed group. They did not discuss steroids outside of their own little clique. Outside of that clique, I didn’t really hear about steroids in any really serious context.

That changed in a few short years. What had once been whispers in the corner of the gym were now open conversations.

By 1986 not only were the gym rats taking steroids and discussing them pretty openly, they actually derided and mocked those of us who were still not yet on board.

I remember one of the most common places where things were shared anonymously was on the walls of the bathroom stalls at Gold’s Gym, where I trained. Guys wrote things like, “Let the steroids do the work!” and other similar sentiments. They’d say the same thing in person, if you asked them.

This represented the antithesis to what bodybuilding meant to me. What was the point if you didn’t have to earn it?

The “effort” I saw these guys put into their training illustrated that they clearly believed it: “Let the steroids do the work!” Many of them never broke a sweat. You couldn’t really call what they were doing hangin ‘n bangin, like we all witnessed in the movie Pumping Iron. And then, to top it all off, they made fun of those who were too naïve to have joined the club!

This frustrated me, but their fast gains were also undeniable, even with their very minimal effort. But alas, such is the nature of steroid use, especially when pitted against the natural trainee.

I was torn on whether to go down that road, but I ended up thinking I’d beat them at their own game. If they were doing steroids and half-assing it, what if I did them but kept the work ethic up? Plus, I was already being accused by some of being on steroids anyway.

So: I made the decision to try them.

Now, before I go on, let me clarify something.

In the subculture, steroids were being openly talked about. But this was still well before the Ben Johnson scandal that changed everything. In public, nobody talked about or really knew about steroids. There wasn’t a lot of scrutiny, really.

This meant that if you were ‘in the know’ there were doctors who were happy to prescribe steroids. After all, they would rather you be under physician direction than doing them on your own.

A few of these steroid doctors became quite well known. If you booked an appointment with one of them on a Saturday, you would see many of your fellow gym members right there at the doctor’s office. Heck, many trainees would start making plans to just meet at the doctor’s office before or after training on Saturdays. They weren’t there for their yearly check-up!

So, having made my decision, I booked an appointment with the local “steroid doctor.”

I went in with plenty of questions. He told me he wished other patients he had who were taking steroids were as concerned as I seemed to be. He told me that taking steroids was relatively safe as far as he could tell. I told him I wanted to do what the other guys were doing, no more and no less, if possible.

And so, just like that, I left his office with a prescription for Deca Durabolin and 2-mg strength Winstrol V tablets.

I was all set to meet the competition on their own playing field. In my mind, that playing field was now back to even.

And I was right. Hard work mattered again. I could actually compete, and if I outworked them, it paid off. In 1986, victory meant vindication to me, if only in my own mind.

The cable TV coverage I have on VHS (it’s starting to disintegrate now) has the bodybuilding commentators saying this about me: “Every so often, in an athletic event, you get to witness someone who is in a class of their own, all by themselves, and they are just a joy to watch—Scott Abel is that guy here tonight.” The other commentator replied, “Scott is the obviously the guy you want to hang out with tonight.” Later, before the awards ceremony, the promoter commented, “The judges better make the right decision here, or we are likely to have a riot on our hands.”

Of course, I knew nothing of any of that at the time. It was months before I got to see it. But again: to me, it felt like vindication.

Perhaps that’s one reason why, by the following year, 1987, it felt to me like you were either all-in or all-out when it came to steroids, at least if you wanted to have any shot at all of advancing. Yes, the doses were still minimal and cautious relative to what we see now, of course, but the game had absolutely changed, and it would continue to change for years to come.

And, though it pains me to say, I was willingly complicit in it. I was “all-in.”

To conclude, let me say this: In 1986, I was young, and to a young mind, the fact that doctors were willing to dispense these drugs for non-medical reasons meant that 1) these drugs must be safe, and 2) there must be little to no moral conflict with using them if doctors didn’t have a problem dispensing them for cosmetic reasons. From talking with others, I know I’m not the only one who felt this way. Having them prescribed by doctors legitimized steroids in my mind and in the minds of others, especially for those who’d been “on the fence.”

But this kind of rationale only made it easier for me to go further and further into the dark side of the force. The trophies were getting bigger, the sport was getting bigger, but those changes went hand-in-hand with other ones.

More on those next time.