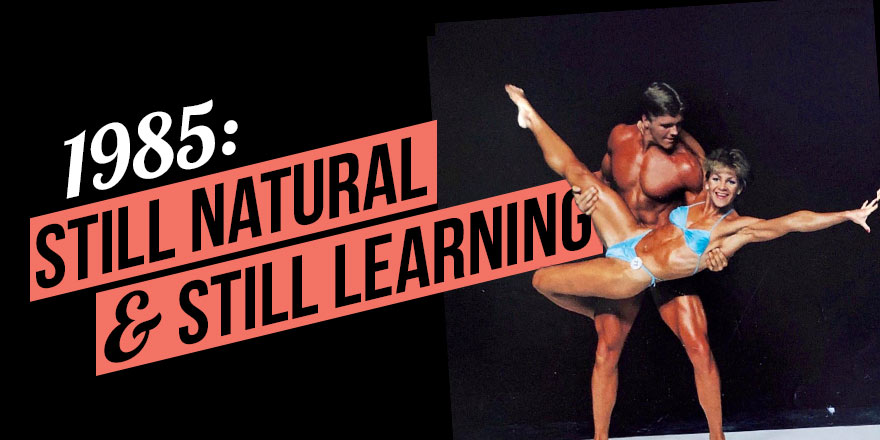 This post is part of a series, and continues on from my post about my first bodybuilding show.

After my first show in 1983, and the attention I received afterwards, I decided I wanted to keep going in this whole fitness and bodybuilding thing.

Two years later, in 1985, I was still a 100% all-natural bodybuilder, and I was also starting to make fewer mistakes. Unlike my first show, by 1985 I had learned how to avoid dieting off as much muscle as I had the first time around.

I had graduated university in 1984. I had an honors degree, and I’d won a scholarship, The John R. Houston Memorial Book Prize, for outstanding academic performance. However, I lacked direction. I’d gotten a job in social work, and had worked a few odd jobs here and there, but “work” was becoming something I did just to pay the bills—so that I could keep going in fitness and bodybuilding.

Here are some pictures from 1985, from front, side and back: 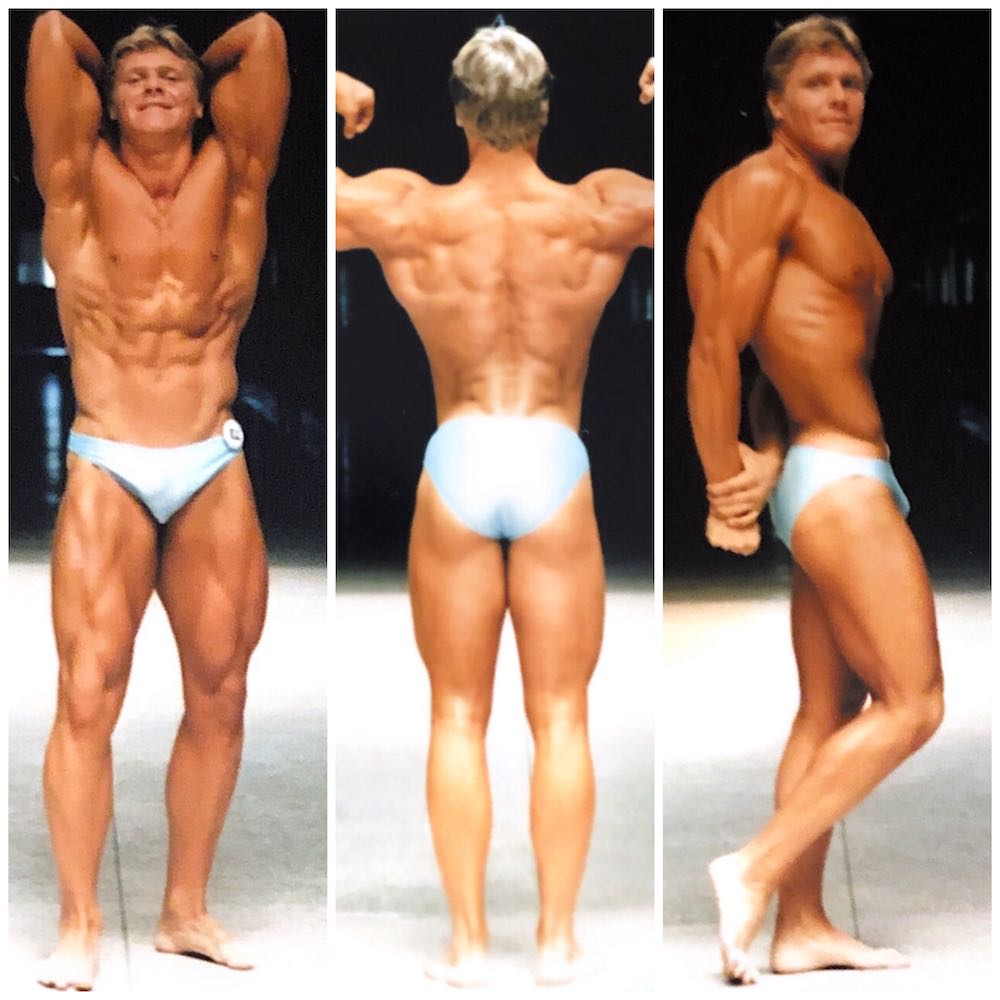 First of all, let me mention the classic X-frame and V-taper: wide clavicles and narrow hips are essentials to succeeding in ‘onstage’ bodybuilding competition. I had these, yes, but they’re really just a genetic thing. No knowledgeable bodybuilder can take credit for having great bone structure. Either you’re born with it or you’re not.

However, I was also seeking balance in treating each of my bodyparts equally. I started noticing what some of the other guys were doing, and frankly, I thought a lot of it was foolish.

For instance, a lot of the guys at the gym were all about slave-training their better bodyparts and shame-training (as in, avoiding training) their weaker ones. Not only this, but the “macho myth” still prevailed, so most of them were worried about that old question: “how much can you bench?”

I basically started to abandon the numbers game. For me it became more and more about aesthetics. This was a shift that would serve me the rest of my career.

Let me add, here, that although I would love to tell you that this was all by design and my own personal genius… it wasn’t. Part of it was simply the fact that early on I cut my teeth in a powerlifting gym, and it didn’t take me long to realize I just wasn’t that strong when it came to numbers. Also, I found focusing only on the big three – squat, bench, deadlift – to be downright tedious.

Anyway, this change in focus started to bring benefits for my physique. I started to make improvements that were not just due to genetics. They were improvements I could actually be proud of.

To give you an example, back then almost every guy’s chest workout started with bench press, then went to incline, then went to decline and then whatever. I stopped doing it this way. Sometimes I’d begin a chest workout with seated flys or cable crossovers. Then I’d do bench press last—or not at all—or only for extremely high reps.

The first time I really knew this was working was when I stopped traffic walking home from the gym. A training partner made fun of me for it. But I remember walking home and people stopping their cars on a busy street to look at me, some honking their horns.

I have had several training partners over the expanse of my career. Some of them have been awful—something you have to watch out for!

But I can also say that there were a few key moments in my career when a training partner made all the difference. And in 1985, my training partner was everything. We were simpatico on every level.

Also… my training partner was a woman. We were not in a romantic relationship of any kind. We just “got” each other, especially when it came to fitness. We would take long bike rides together, like 40K, or more.

She was the sister of one of my valued and dear friends. In 1985 no self-respecting, macho iron-head would be working out with “a girl.” But here’s the thing: I think this was a huge advantage. It prevented me from falling back into the macho-training trap of max bench presses, or worshipping how much I was lifting. It helped me stay focused on the aesthetics.

That focus on aesthetics is what attracted me to another competition.

The artistic side of bodybuilding — bodybuilding as physique performance art, with its choreographed routines and so on — was the most appealing part of the sport to me. So, that year I decided to only do a “couples” competition with my training partner.

The local iron heads were full of commentary and advice about what a waste of time this would be. I remember one guy suggesting that maybe I was afraid of competing as an individual. They were wrong.

I loved the posing routines; I loved connecting with the audience; I loved the idea of taking bodybuilding beyond just a comparison of a few bodies. This gave me an advantage.

That just wasn’t me! I wanted to think of it more as a performance art.

So, my partner and I spent a lot of time and a lot of work on our routine. We wanted to do something different—something that would be creative, provocative, and original.

In the end, we came out and performed a sultry and suggestive posing routine to Marvin Gaye’s “Sexual Healing.”

The audience loved it. Someone later approached me and said, “After your posing routine, half this audience can’t wait to get home and get busy!”

With no figure competitions — and the explosion of participants that it led to — there was less of a pharmaceutical arms race among the competitors. My partner still looked feminine and athletic, but not “extreme.” 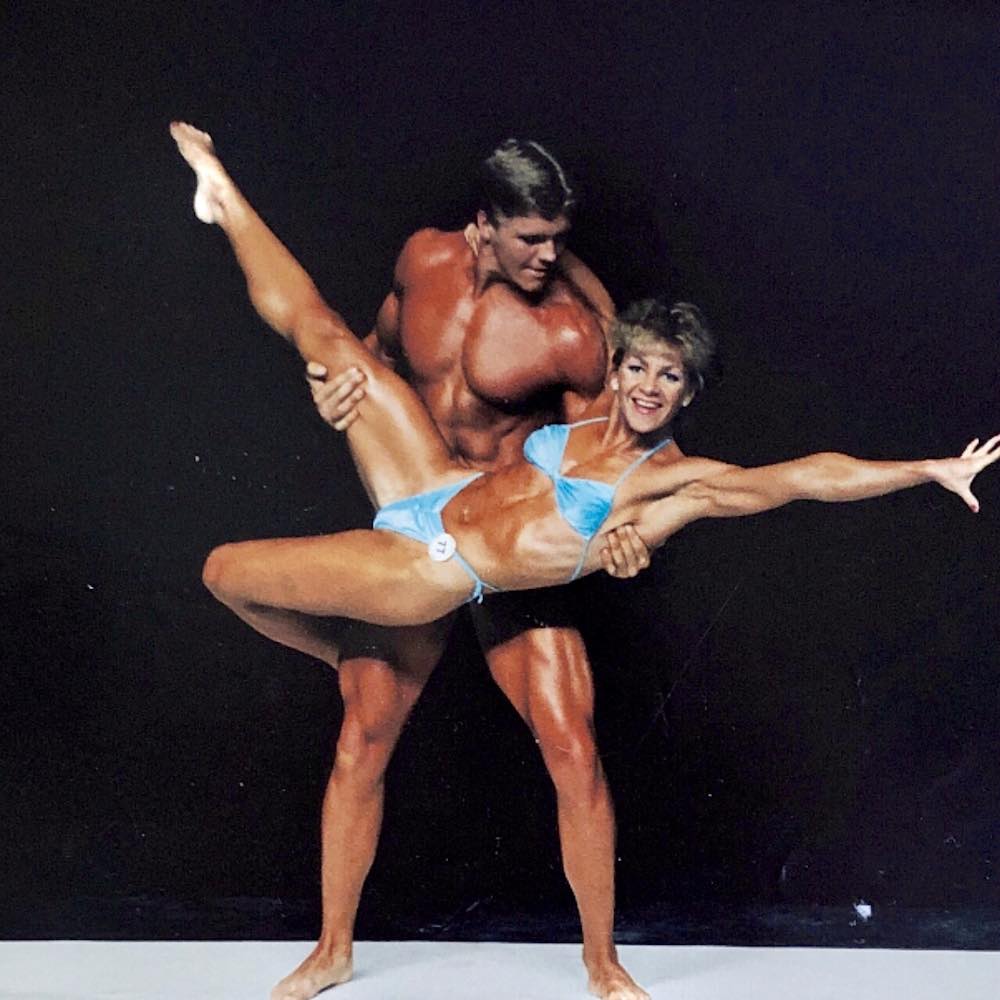 There were no deep leg cuts and veins in the abs and other such indicators of drug use – nor was there a hollowed-out sunken face, an indicator of extreme and over-dieting.

It was all still relatively clean and innocent, especially on the local level. But that was all about to change, at least for me.

It may have been subtle, but looking back, 1985 represents a turning point for me. It paved the way for much of the successes I experienced in 1986 and after.

By NOT focusing on competition, by focusing more on physique as a performance art, and by trying different training methods, I was coming into my own. It had no name, but I was really beginning to think about what would become my Innervation Training Methodology. Its principles were far from fluid or clear, but it was developing, alongside with my physique.

Things were taking shape. I’d made important distinctions about training. I’d dieted down in a much more intelligent way. I’d tried new things on stage.

I believe strongly in “learn by doing.” You can study principles and methods all you want, but the only way to become proficient at anything is by living in the trenches and actually doing it. And then, not only that, you have to take that next step and actually learn from what you’re doing.

Looking back, 1985 was when I began to truly appreciate this idea, and it served me extremely well in the year to follow: 1986.