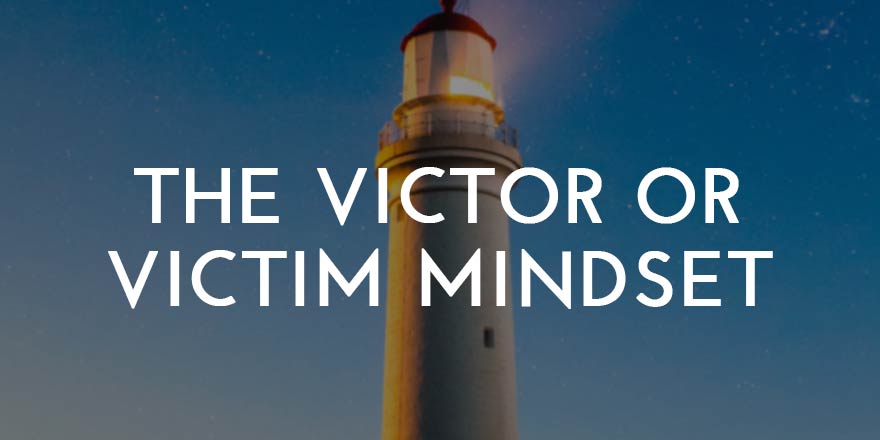 The Victor or Victim Mindset: How to Choose the Victor Mindset

Someone wrote me the other day, and it reminded me of one of my very first radio interviews.

This was a radio program more generally about “success,” so having a bodybuilder was a bit “out there” for them.

The interviewer’s face had a look of puzzlement to some of my answers—partly because I was a bodybuilder, but partly, I think, because I had a unique perspective. I was mixing sociology with kinesiology, then mixing those things with traditional bodybuilding thinking.

One of the questions the interviewer asked me was, “Why you? How did you sculpt your own physique, and how did you do it with your clients?” The question was phrased in terms of the idea that most people don’t do it, or can’t even lose weight, and so on.

After the interview, he told me he was expecting an answer about training programs, supplements and diet tricks. My immediate answer, however, was this:

“I was realistic about what it was going to take to get there.”

I was referring to consistency, commitment, and sacrifice.

That answer became an answer I would repeat over and over again as the years went by. I was always realistic about what it was going to take to get there, and that kept me focused. To this day I still find that to be the major element that separates those who are victorious from those who continually come up short in reaching goals they set for themselves.

The truth is you have to be willing to meet success on success’s terms, not on your terms. This means you can’t just be committed and “all in” only when it is convenient to be so. Yet I see this all the time.

If you have more than 50 lbs. to lose, you can’t only be committed from Monday to Thursday. It won’t work.

If you want to lean-out for the summer then you can’t hit the snooze button in the winter and miss the gym because of it.

Internally – in terms of your own mindset – you can either be a victor or a victim in this life. Very seldom can you be both at the same time. I’m not talking about blaming the victim or anything like that. I’ve written before about how disgusting it is when that happens to clients who report metabolic damage.

Let me offer you a short-list comparison, at least in terms of mindset:

I have worked closely with thousands and thousands of clients. Some of them achieve greatness, some don’t. I can tell you that a big difference between those who “do” and those who “don’t” is summed up in that table.

My observations necessitate me writing articles like this every so often. It just seems to me that people fall into one of two motivational categories:

Some people are more wishy washy than others as well when it comes to knowing what they want and then having the determination to go after it till it is accomplished.

Oh sure, others have some kind of outcome in mind, but because they focus so much on fear of failure – they lack the real and true determination and the kind of drive that achievers have. And that almost always leads to a habit of quitting and giving up – and yes, even in this example, habits are very hard to break indeed.

Here are some of the key differences, summed up:

Achievers, or what I call “victors” above, just expect achievement once they declare a goal. Part of this means having realistic expectations as to what is possible, but also what it’s going to take to get there. Victims usually have their heads so far in the clouds that their expectations are nowhere near realistic. It would also be safe to say that such people also have their heads way too far up their own you know what.

Victors prepare their mind every day to be set to the task of what needs to be done in order to achieve the goal down the road. Preparing to achieve is a huge part of the victor’s inner operating system.

Victims get themselves all tied up in knots and let that affect their efforts in terms of consistency, compliance, and personal vigilance and discipline. They become emotionally attached to things that are beyond their own control. That leads to anxious energy, frenzied energy and worried efforts–not the kind of confident compliance that leads to competence. Many victims become examples of “trying too hard” and not knowing the difference between focused energy versus frenzied effort.

Focus on Yourself. Don’t Play the Compare, Contrast, and Compete Game

In other words, they haven’t yet developed the mental and emotional fitness to even be prepared to be victorious and to become a victor. Because they aren’t prepared for real victory in a vision quest, they seldom experience one — not in real terms anyway.

Accept that there are NO SECRETS. NONE.

Gertrude Stein said, “The secret is that there are no secrets.”

Non-achievers, victims and quitters refuse to really accept that, on a deep level. Real achievers, real victors, they know that while there are no secrets, there certainly are recipes to being a victor, to achieving, to becoming “victorious.”

The recipe is this:

Practice and then practice some more.

Practice the right attitude along with that practice.

Marry yourself to hard work, discipline, regimentation, consistency and compliance to the process, not the goal.

Surrender and “let go” of any drama or martyrdom.

The problem is this recipe is just not magical enough for the victims and non-achievers.

Know the Price, and Pay It

Victors are all about paying the price and earning each victory. They are all about a personal investment in the wealth of being a victor – and they know the difference between ‘working to be one’ and ‘wanting to be one.’ They fully embrace the ‘no perks without the works’ work ethic. And they pride themselves in that.

When you are willing to pay the price to be a victor; then victory and achievement are the inevitable offspring of that willingness.

They want to earn the win, the achievement, and the victory. They don’t want it “handed” to them, and they don’t have the fantasy “play the lottery mentality” that so many victims and non-achievers have.

Moreover, victors enjoy being victors. They enjoy accomplishments and achievements. Victims just tend to worry and stress over all of it, so even if they do happen to win an occasional victory, they don’t seem to enjoy it, or hold on to it, or sustain it.

Listen, I’ve seen it too many times to count. Let me tell you the quickest route to becoming a victim is wanting to succeed so badly that you become terrified of making a mistake. Mistakes are part of becoming a victor.

This is why elite athletes talk about losing their “mojo.” When you fear mistakes you can suffer “paralysis by analysis.” At the elite level, even a microsecond of hesitation, or even just a tiny break from the usual thought and skill patterns they have established over decades — that’s the difference between victory and defeat, between a goal-scoring streak and a drought.

Victors don’t do that. Being afraid of mistakes leads to perfectionism and that will also paralyse you. You can’t reach your full potential if fear of failure is shaping your motivation and commitment.

Think of the game of golf for a minute. It is an undertaking that can never truly be won, only played. For every hole you may go under par, there’s a hole you may get a bogey or worse. For every shot you “should have made better,” there will be another shot where you outdo yourself, and maybe even have some luck involved.

Strive for Excellence, Not Perfection

None of it is mistake-free or “perfect.” It’s how you do over the full 18-hole course that matters. At the higher tournament levels, it’s even more than that. It’s not just how you did today, but how you maintain that tomorrow, and the day after that.

That is how you should look at playing the game of life. Every day is just another hole of golf – every week is just another round of golf. It can be played, but never won. Show up and play; show up and practice! Aim to do better than you did on the last hole, and the last round. Forget comparing, contrasting and competing with how someone else plays their own golf course.

Victors just aim to become better golfers, albeit in life more generally. They do so by practisingevery element of the game. Your life works the exact same way. There will be birdies, and every now and then there will be eagles and rarer still there will be holes in one. The holes-in-one require a bit of luck, but it’s the consistency of skill, excellence and dedication that makes them even possible.

Learn from Defeat, Don’t Wallow in It

There will also be bogies, there will hitting into sand traps and struggling to get out. There will be missed opportunities, and every now and then you will play a round and know you could have done better.

Victors learn from that; victims wallow in it.

But no matter what the outcome, you’ll never be a victim if you always see the process toward achieving your goal as a daily valuable opportunity to learn and grow.

Every day you are given a glorious opportunity to be just a little better than you were yesterday. How great is that! You can look at your weaknesses and aim to improve them; but all the while never forgetting your strengths either. Victors count on their strengths, while not being afraid to face and engage their weaknesses. Experiencing victory is more than winning and more than accomplishing a goal. And it’s a helluva a lot more than “beating someone else.” Victory is merely an outcome.

Embrace an Ongoing Identity, Not a Single Outcome

Victors know they aren’t going to win every time they set out to win.

All the greats in any field of endeavour experience defeat. They just never fear it. The more you live as a victor the less these defeats get in your way of working toward that next thing. The victor is always moving forward in life.

Victims sit around worrying about what might go wrong.  They let past defeats taint their current motivations. Victors focus on how to make it right. Valor grows by daring to try, falling down, getting up, dusting off, and trying again. When you dare, you can be victorious. When you hold back and resist, you will seldom be.

You can’t always control what happens externally. But internally, when you look at life as a whole, you can be a victor, or you can be a victim — at least in terms of a mindset approach to moving forward in life or accomplishing a goal. It’s really up to you.