The truth about the “coffee controversy” (I’ve got good news) 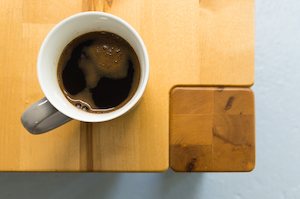 As I sit here drinking my venti Columbian blend, I recall how I wanted to write this article some two years ago when two contradictory research findings about coffee came through the news cycle within a week of each other.

One study “concluded” that coffee drinking could lead to ill-health and the other stated that coffee consumption undoubtedly promotes better health.

So what's the truth?

The overall research for the last 20 years or so has been VERY CLEAR on coffee.

And the research overwhelmingly supports coffee drinking as a potential health-promoting beverage. There actually, really isn’t much debate and where the overwhelming mountain of evidence is regarding coffee and health.

But oh how North Americans love their research scare tactics and making people “afraid” of pretty much anything “enjoyable” these days. So let me spell it all out for you in this article, just after I grab my second morning cup of venti Columbian blend!

The Health and Physical Effects of Coffee

It’s no secret of course that coffee heightens alertness and also increases athletic performance. That fact has never been in dispute. Caffeine improves speed and strength by accelerating the transmission of electrical signals from the brain to the muscles.

It improves endurance by reducing perceived effort, allowing for things like marathon running to feel easier.

And of course it can have positive situational metabolic effects and increase fat burning via mobilization and use of free fatty acids.

Indeed, there is now pretty much a library’s worth of overwhelming evidence illustrating coffee’s health promoting and other positive effects. The latest is a coffee blend with MCT oils to enhance metabolism. But I think the jury is still out on that one at this time.

Now I just want to go through the “short-list” of beneficial physiological effects of coffee/caffeine consumption that are well-known, before I move on to lesser-known research about the health benefits of your morning legal stimulant.

It is quite clear from the research that any trainee seeking an edge in performance and adaptation because of increased performance – these trainees are “enhanced” by caffeine intake, particularly caffeine assimilated via coffee consumption.

…But let’s not be idiots here – “more” isn’t necessarily better, either.

Other Correlations with Coffee Consumption

So it is pretty obvious that trainees interested in enhancing physique and performance would do well to become coffee consuming connoisseurs. But there are other correlations in research that suggest the health and wellness promotive effects of coffee consumption.

Lets’ take a look at some this ‘peer-reviewed’ research below, because in many corners of the health and nutrition industry, coffee and caffeine continue to be considered “unhealthy” even though the truth in the vast majority of studies paints a different picture.

>> In 2011, researchers from Harvard’s School of Public Health reported that habitual coffee drinkers were up to 20% less likely to suffer from depression than were people who did not drink coffee.

In fact, over the last 20 years or so, research has certainly seemed to settle the matter about coffee consumption and its relation to health, and it is settled IN FAVOR of coffee as a health-promoting indulgence. Research has shown that coffee drinkers are healthier than non-drinkers in many distinct ways.

Moreover, it seems that the heaviest consumers of coffee seem to benefit the most.

Research is pretty clear that coffee beasts like myself are less likely than others to develop heart disease, diabetes, dementia, specific types of cancers, liver disease, Parkinson’s Disease, and as mentioned, depression.

One study suggests coffee drinkers may even out-live non coffee drinkers. A 2012 study published in The New England Journal of Medicine found that, within a population of more than 400,000 men and women, regular coffee consumers were 10% less likely to die during a 13 years observation period. And what’s also important to point out here, is that it’s not just the caffeine content of coffee that enhances health, but also its anti-oxidants – something that seldom gets much research attention when discussing coffee-intake.

So… why do we still hear about the “controversy” of coffee?

So this contradictory research that suggests coffee and caffeine are “bad” – where does this come from, and is it accurate?

In spite of the overwhelming evidence of the benefits of coffee drinking and the superior health and well-being observations of people who drink coffee, there are still experts who reject any notion of positive effects from coffee consumption, and these “experts” are usually part of some kind of diet zealotry.

For example, misinformed proponents of The Candida Diet, Detox Diets, various cleanses, and even The Zone Diet and the Atkins Diet forbid, warn against, or advice very strict limits on coffee consumption. “Tea good – coffee bad.” But beneath it all is this age old North American Diet Mentality suspicion that things people consume for pleasure… “well that can’t be good for you” –

Now, let me explain where and how “anti-coffee crusaders” get off track.

One recent study on the ill-effects of coffee simply didn’t hold up upon deeper investigation. The study suggested that people who drink 8 or more cups of coffee per day (me, for example) were less healthy in a variety of ways than those who didn’t drink much or any coffee at all. (Published in Mayo Clinic Review 2013) However, upon closer review of this research a different explanation surfaced.

It seems this had more to do with very speculative correlation than causation. It turned out that the people of the sample group observed in this study — those who drank this much coffee, well these subjects also seemed to be people who smoked, who drank alcohol regularly, who didn’t exercise much, who didn’t eat well, and who reported working long hours, eating fast food, and/or having stressful jobs and lives.

So upon closer inspection coffee consumption as a stimulant was merely an indicator to a deeper issue and not a “causative” factor at all.

For coffee connoisseurs like myself – who do not have stressful lives, who eat well, exercise, take care of our bodies and don’t use recreational drugs or alcohol and don’t smoke – well this “unhealthy profile of coffee drinkers” simply disappears.

But this is how “reductionist” research is often twisted to produce a desired message over and actual finding. And what is missed in all of this “science” is the human experience with any food. I myself, will continue to drink my morning coffee – because of how I relate to the experience of doing so; beyond nutritional science and research – as in ‘the psychology of the human experience of eating and drinking.” I have never, ever bought into this silly modern notion that any enjoyable food or taste experience must be bad for me. I am a foodie and I am never going to be some strange new-age nutrition, diet, and food martyr.

I enjoy my daily coffee immensely.

And for all the reasons explained above – I suggest you do as well – “for the pure health of it!”

Duhon, J. et al, “Effect of caffeine RPE and perceptions of pain, arousal, and pleasure/displeasure during a cycling time trial in endurance trained and active men” Physiology and Behavior, May, 2012