﻿An amazing new “supplement” you might be unreasonably biased against 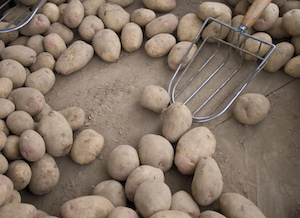 What if I could tell you about a new wonder supplement?

What if I could tell you that the amino acid profile of this wonderful new supplement is as good or better than whey protein calorie for calorie. What if I could show you that this new wonder supplement has a higher biological value than soy protein as well, as far as that goes – but it is also from a plant source?

Oh, and to make this new wonder supplement even healthier; what if I make sure the micronutrients of this new supplement is rich in Vitamin C and zinc, as well as B vitamins, (both of these important for anabolic processes of tissue building) but also potassium, antioxidants, and even fiber for digestive efficiency. You see how the mind works in paradigm blindness. If I talk about this profile of a supplement, everyone is all ears and interested. But if I tell you this actually the nutritional profile of a potato – well you are incredulous, or less interested, because well, potato is a starch, and that can’t be good for you. But this is how modern nutrition bias works on your diet-mentality.

In short, the potato is one of nature’s best whole food suppliers.

But there is much more than can be said of the power of the potato that cannot be said of most any other food; and that is that you could live indefinitely on a diet of just potatoes, if you had to. That is how complete this one single unprocessed food source is. In fact this has been done over and over again in the past.

Danish physician and nutritionist Mikkel Hindhede in the 19th century tested his hypothesis that potatoes might be used to stave off famine; back in times when famine was a real potential issue. He lived off of mostly potatoes (with a little milk and butter) for several months. And not only did he live off a “potato diet” he thrived on it as well. His own conclusion was, “man can retain full vigor for a year or longer on a diet of potatoes and fat.” And this conclusion was of course correct in biological terms.

In an attempt to confirm or refute Hindhede’s findings – a decade later Polish researchers Stanislaw Kon and Aniela Klein also went on an all potatoes diet for 167 days (with some coffee and some fruit). Special notes were made that digestion was “excellent” throughout the experiment and that Kon even maintained his athletic training schedule during the diet as well.

Suffice it to say there was a time in nutritional history when the potato was held out to be more or less a “nutritional hero” of sorts – the kind of status reserved today for special supplements and acai berry drivel and the rest of the nutritional nonsense out there. But I doubt anyone would or could go half a year “healthily” on an all acai berries diet.

But there is more to the history of this tremendous tuber. In fact, the first great South American civilization, thrived because of cultivation of the potato. History shows that other potato-enabled civilizations followed, including the Incas; for whom two core staple foods were central to their survival – potatoes, and maize – both starches. Historically we see the nutritional superhero status of the potato across Europe as well. The potatoes’ superiority (super hero status) to previous food staples across Europe and even in the orient is well-documented. (see references in Part 2) What is also well-documented is that population growth followed everywhere that potato farming grew, from Switzerland to China.

But it’s not just that potatoes allowed for populations to grow and sustain themselves. Historically, we also see that where the potato became the main food staple of a society, people became measurably taller as well – another indicator of superior nutritional status. At particular junctures in human history, it is fair to say that potatoes cultivation and consumption singlehandedly led to the entire human race being healthier than it had even been before as a species, and especially as a civilized species.

And of course, it is well-documented that the lowly potato led to the survival and thriving of the Irish. In fact once the potato became the chief source of caloric energy in the Irish diet, their population doubled during that century – and it practically doubled yet again, in the 50 years following that. And by the early to mid 19th century, one in three Irish lived on virtually an all potato diet. And when a fungus wiped out the potato crops, the great potato famine of Ireland from 1845-1852 led to one million dead from the famine, and another million who emigrated to escape it. Imagine any of the people from these eras of history – where their families thrived and survived with the potato as their staple – but failed to thrive without it – imagine trying to convince them that potatoes are bad and unhealthy; and that they should stay away from them.

Oh and from a “go Green” perspective as well, agriculturally, today the potato yields more food energy per planted acre than any other thing being planted – another “plus” speaking to its superior nutritional and life-support status.

And yet , because of modern fad diet religious nonsense that started with Atkins, and continued with Paleo, the potato has gone from Superhero to Superzero nutritional status; only it just makes no sense when you look at the true importance of the potato throughout history and the true actual nutritional composition of the potato as well.

What you have is a perceptual bias against the potato, that simply doesn’t stand up to academic scrutiny. Wait till you read part two on potato power!