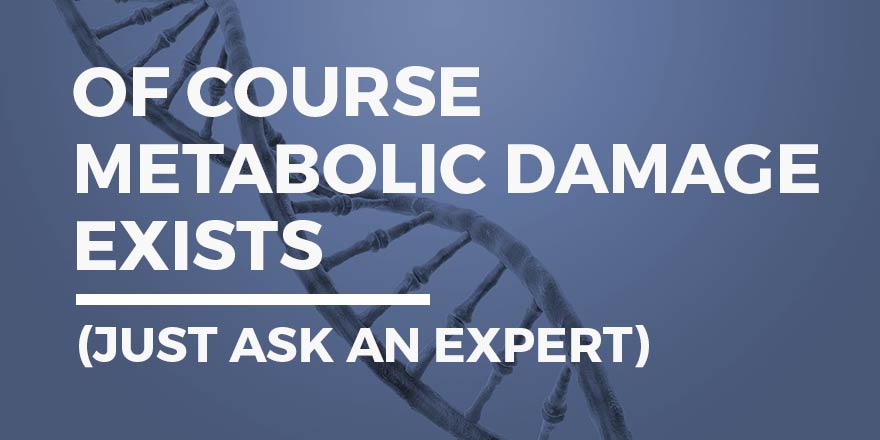 I recently re-released Metabolic Damage and the Dangers of Dieting, which was originally written about a decade ago. Back then it wasn’t long before I was rolling my eyes in disgust about what a buzzword “metabolic damage” had become in the industry. The term had been diluted to the point of nonsense. Now, a decade later, I am rolling my eyes again at what’s happening.

Apparently the new trend is to claim that “metabolic damage” doesn’t exist.

First, most people in denial of metabolic damage are simply people who don’t deal with it professionally, and don’t have to, at least not in real terms. I’ve been dealing with it with clients since well before 2003. Yet according to internet logic, I am supposed to abandon what I see week in and week out because a study proving it exists isn’t out there yet. People take this to mean that since a certain kind of research doesn’t exist, there is no science to back it up. The fact is universities are not lining up to do studies on the long-term effects of figure and bikini competition diets combined with crazy amounts of cardio on people who are already lean. (And as you'll see below, there are other issues with trying to isolate the variables in human metabolism.) With that in mind, you have to know where to look for true expertise in regards to metabolism and the actual science behind it, because the expertise and science is there.

I was recently linked to a lecture by Dr. Diana Schwarzbein. She is an endocrinologist, and has been practicing (that is, working with real clients) for 25 years. I’ll actually show the lecture below, because it wonderfully articulates a few key points about the nature of metabolism and science that is well-worth listening to and watching, especially if you’re mostly familiar with the academic research cited by the fitness industry, or you’re on the fence about metabolic damage because so far you haven’t seen an actual verified, double-blind placebo-controlled study to show it. For those of you who really want to learn, please watch all of both parts. It’s got tonnes and tonnes of good stuff. A bit further below I’ll mention just a few key themes with time stamps, for those who are interested.

What you’ll see in the lecture is a true expert in human metabolism who uses the phrase “damaged metabolism” over and over again. She makes many of the same points I’ve made in my books and my blogs. She criticizes fitness trends and sacred cows like low-carb and keto diets, Paleo diets, just to name a few. I wish I had these lectures in writing my books, but they were only recently just sent to me.

Notice that Dr. Diana Schwarzbein is a true expert. She’s a board-certified endocrinologist, and she has 25+ years of experience with internal medicine and is a noted expert on metabolism. She also uses the term “metabolism” as a blanket term that includes hormonal function and balance and health, and biochemical wellness and health as well.

I doubt she would have a problem with the term “metabolic damage” as a catch-all term that considers a whole host of risks, causes, and effects. “Metabolic” is a term that encapsulates a variety of biological activities and biochemical processes. Your “metabolism” is not a number of daily cals burned; it includes a host of biochemical functions and processes which link together a whole host of human systems. The fitness industry wants to reduce it to “cals in, cals out.” Sorry, but no. All our bodily systems are integrated; they don’t work by themselves; they work in concert with the others.

I present her two-part lecture here for those of you who truly want to learn something. I’m astounded by how good this lecture is. I wish Dr. Schwarzbein had an interest and an access to post-contest competitors — when you watch the lecture, think about what she talks about (average yo yo dieting, skipping breakfast, the kinds of diet mistakes “regular people” make etc.) and how she talks about longterm consequences of these things, and then think about the crazy extremes competitors go through.

This ridiculous notion that metabolic damage isn’t “real” is especially insidious because it allows inept contest-prep gurus to hide behind the statement. These are gurus with no educational background at all, whose idea of logic and debate is posting an internet meme. I can only laugh to myself trying to imagine a fitness industry follower interruping Dr. Schwarzbein to claim “metabolic damage doesn’t exist.”

I'll embed the videos here, with notes on specific themes below them. (The notes also have time stamps in terms of when to look for what.)

I don’t want to reduce her lectures to just three themes, because there is of course so much more going on. But I think the following three themes are relevant to metabolic damage and the debates I’ve seen over “whether” it exists or not.

Theme 1:
What she calls the “360 degree integrated view” of health

Metabolism is NOT just daily calories burned. You can’t think about the body in terms of individual, isolated compartments. At 11:20 of part 1 she says “for lack of a better term, a holistic approach.” I think that sums it up nicely.

Two other timestamps worth mentioning here:

Theme 2:
You can’t do a double-blind placebo-controlled study to test this stuff

But 25:00 to 35:00 of part 1 seems to be the most relevant meat of this. That’s the part where she talks about how there are no double-blind, placebo controlled studies for this kind of thing, and there never will be, because that’s just plain not how biochemistry works. There are too many variables to test in that kind of controlled environment. Indeed the first point/theme above is one important aspect of the “why” behind this second point.

She also tells the story about how she was attacked for not waving these double-blind placebo-controlled studies around, and that part's gold. That story starts at 29:00.

Real academia is about the science and not necessarily about having a PubMed abstract handy to frantically and mindlessly wave around. To that I say, amen! The fitness industry seems these days to only recognize science if it comes in the form of just such a study. This is myopic. That’s not how science works for certain things. You can’t test everything in that way on human subjects. Most studies such that are run are very limited in terms of what “conclusions” you can actually extrapolate from them, but everyone forgets this when mindlessly waving them around. So often, “the science” and “the studies” are not the same thing at all, and so many things, including metabolic damage, cannot be properly examined with these kinds of studies, especially given the limitations of funding, and the fact that most universities aren’t about to pour money into looking at the long-term effects of physique competition. This does not mean that the science behind the concept doesn’t exist.

You’ll note she says that what she has instead of these studies is just plain old science. Just because you are not using double-blind, placebo-controlled studies on human test subjects doesn’t mean you have thrown science out the window. At 32:40 one audience member, agreeing completely with her, articulates how studies are done, but they take place in a completely different way: “You go into a lab, and you find out what happens when you put these chemicals together and what the reactions are. That’s why we have agreement among biochemists. Those same reaction occur in our gut, in our cells, wherever it is. There’s plenty of experimentation, there’s plenty of studies, it just not that there’s these double-blind and so forth and so on…”

Now, let me be clear here. I’m not dismissing studies. I’m saying don’t wave them around blindly, and understand what they can and cannot do. Double blind, placebo-controlled studies absolutely have their place. They are extremely important for science-based research, and for opposing quack medicine and therapies. You just have to understand what their limitations are as a whole, and what the limitations are of any particular study (what conclusions you can actually draw from it, etc.). Paul A. Offit’s Do You Believe in Magic? goes into them, for example, to show that most supplements, vitamins, and alternative medicines offer pretty much no benefit. Ironically, many people who say “metabolic damage doesn’t exist” take plenty of supplements with no science to back them up at all.

Theme 3:
Her repeated use of the term “damaged metabolism”

She uses this throughout the lectures.  She refers to a damaged metabolism, and to a compromised metabolism. In the first lecture, see 19:17 and 19:29, where she refers to a damaged metabolism. At 24:35 she uses the term “compromised” metabolism. Then in part two, see 10:49, 55:33, and 57:03 for references to a “damaged” metabolism. At 44:55 of part two, she talks more specifically about how she sees in her practice with her own patients exactly what I see in my Coaching. I quote her directly: “You can push it [your body] on the using side, and it will compensate for you. But it won’t do that forever. And you know this from people who do cycling low-calorie diets throughout their whole life, and all of a sudden one day they go, ‘I can eat nothing and I’m gaining weight!’ Okay, I see that all the time.”

Does “cycling low-calorie diets” sound somewhat like what I call “yo-yo” dieting? Hm?

Once you consider the points 1 and 2 above, regarding what we mean when we say “metabolism,” then of course she uses the term “damaged metabolism”! Once you consider what she’s really trying to get across about the nature of hormones and the human body and so on, the idea that metabolic damage doesn’t exist is just plain absurd.

A few more assorted points about the video(s):

I was honestly floored by how good these videos were, and I wanted to share them with those who were really interested in learning and getting “beyond” the scope of just the fitness industry. Next week I'll present Part II, which will have more of my own points about metabolic damage, hormonal dysregulation and obstruction, and what it is, and the idea that it “doesn't exist.”