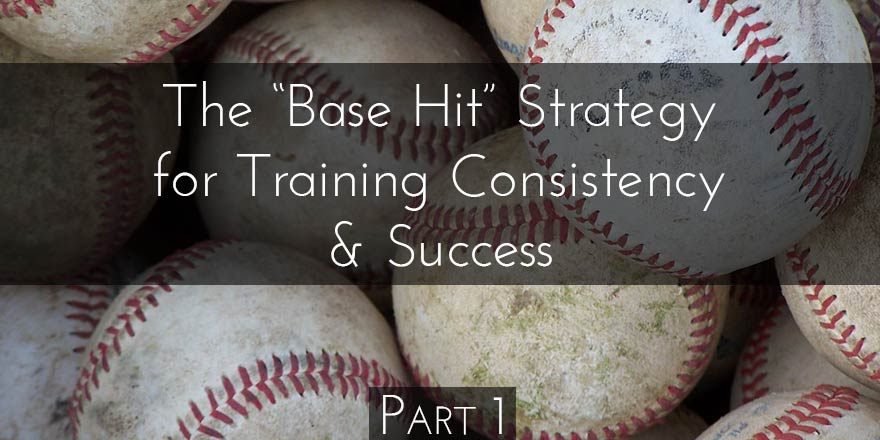 Embracing the “Base Hit Strategy” for Training Consistency

Then you go to the gym thinking you are going to take the day’s stress out on the weights, but the weights end up taking it out on you instead. So then instead of relieving stress, your workout just added more stress to the pile. Does that make any sense?

I want to outline for you the mindset of the “base-hit strategy” for training consistently while living in the real world.

A few weeks ago I received a letter from a former client. This guy was at one time a National Bodybuilding Champion. I remember him well. He was always a real hard-training athlete and one of the few who could “hang 'em and bang 'em” with me back in the day. But I hadn’t heard from him in about 15 years. He wrote to ask me for help with his struggle to get back into regular training again.

He had been away from training for several years. He had a family and a good job. He now has two kids under 5 yrs. of age at home and another one on the way. He works a job that is very stressful and he is also completing his degree in his “spare time.” And let’s not forget he is also now 15 years older than when I knew him and trained him.

He wrote to tell me of his struggle:

The answer was pretty simple to my eyes, and I see it all the time. He isn’t that 20-something trainee anymore, with no responsibilities and no outside real-life stress. He is trying to train the same programs in the same way he did 20 years ago and this has led him right to where he is at: crashing and burning each and every week. I had to explain to him about the mindset of the “base-hit strategy” for training consistently. This “was” a guy who used to be able to go the gym and swing for the fences and aim to make every single workout “a home run.” There was only one training gear for him then: “on.” But I had to explain to him that he isn’t that person anymore.

That mentality will no longer serve him.

I taught him how to employ the “base-hit strategy” and I want to explain this to you all as well.

Training “should be” a strategy game. Baseball “is” a strategy game. For those who understand baseball, it’s not about just getting up to bat and trying to hit a home run or trying not to strike out. There is much more to it.

More often than not you hear managers and coaches tell the players, “just a base hit now – just put the ball in play – keep the inning alive.”

What a great way to look at training and training intensity. Some days you may have to workout and while you planned a home-run effort, a base hit strategy makes more sense.

Your body just isn’t “feeling it.” So why swing and miss? Why strike out? Just get a base hit – keep the inning alive. But in the case of training the “inning” is your training week. If you have a real life you just can’t show up for the gym and think you can apply a home run effort for every workout. Every kind of stress – physical, mental, and emotional, takes a toll. And they all tap into your overall energy reserve. It’s simply not realistic or wise for that matter to think you can give a homerun effort in every single workout.

I know we live in the era of “train till you puke” and all this other ego nonsense. But none of that has to do with “planned, progressive, personalized programming.”

Worse than this is when you go to the gym trying to make up for lost time or for cheating on your diet and so you swing hard and strike out. You haven’t learned to follow the biofeedback your body is sending you. Sometimes “a base hit effort” is all your body can muster for you. If you leave your ego out of the equation, then you will come to understand that this is more than enough to keep you going and to “keep you in the game.” Like my former client above you need to learn the importance of consistency over intensity and to work ‘with’ your body instead of always working ‘on’ it.

[Tweet theme=”basic-white”]Learn consistency. Learn to work ‘with’ your body instead of always working ‘on’ it. http://bit.ly/1N0uJHV via @CoachScottAbel[/Tweet]

Follow me here with this base-hit baseball analogy as well:

In a game I watched recently the visiting team comes up to bat first. The first 6 players get base hits. The next player hits a long fly ball and is out. The player after him strikes out. The next three players all get base hits as well. And then the next batter grounds out to end the visitor’s inning at bat. Before the home team even comes to bat, they are down 7-0, and no one had hit a home run yet.

In the home team’s bottom of the inning, they are so desperate to erase a 7-0 deficit that they try to make it up all in one inning as well. The first batter swings hard and strikes out. The second batter hits a long fly ball to the warning track and he is out. The third batter, trying to get something going – swings at a really bad pitch and strikes out. Inning over. The home team, trying to hit home runs to make up a big deficit ends up going into the next inning even further behind.

This is what was happening to my former client trying to get back in the game. Every time he couldn’t finish a training week he went in the next week trying to make home run efforts to “catch-up.” He kept striking out and ending up further and further behind, eventually out of the game entirely. I know this analogy resonates with many of you as well.

Listen, applying intensity is all about nuance and subtlety. It’s not about being either on or off.

The other day I saw a T-Shirt that read “Go Hard or Go Home” – this is just ego bull$hit and nonsense. My former client I mention above could train as hard or harder than anyone I knew back in the day. He was trying to go back to the gym with the “go hard” mindset, and all he could do then was “go home.” That’s not efficient, it’s not a good strategy, and it’s no way to build training consistency in a way that works with real life and doesn’t steal energy from it. What good is it if you can “go hard” in the gym and then be too tired to function in the rest of your real life? “Go Hard or Go Home” is for kids and people with giant egos. It’s a recipe for burnout if you are a real person with a real life influencing you, hormonally and otherwise.

The truth is that it’s not just how hard you train that matters, but how efficiently you train as well. This means understanding biofeedback and application of intensity. Applied intensity is a lot like using the gas peddle in your car. It’s not always meant to be “peddle to the metal” to get where you want to go. Smart training matters. It especially matters if you have cosmetic fitness/physique goals but a real-life that this goal must fit into as well.

[Tweet theme=”basic-white”]The truth is it's not how hard you train that matters, but also how EFFICIENTLY you train. http://bit.ly/1N0uJHV via @CoachScottAbel[/Tweet]

You need to embrace the benefits of the “base-hit strategy” and keep your home-run ego in check.

In the future, I'll get deeper into the base-hit strategy. I’ll explain why you can’t just put the rest of your real-life aside and treat workout intensity as a separate entity.  I’ll explain why consistency trumps intensity every time. But for now, you need to at least begin to consider adopting the base-hit strategy. How many times have you gone to the gym trying to train for home runs because of missed workouts or diet-indiscretions you want to make up for? That isn’t logic. It’s ego run amok.