The other day I’m sitting in a coffee shop listening to two overweight ladies talk fervently about “diet.”

(The irony is never lost on me regarding how often I come across overweight people who talk about diet, diets, and dieting – and how much they seem to “know” about things that don’t matter about diet.)

Today, this one lady has some “raw food” nonsense book in her hand. She’s explaining to the other lady how cooking is so “unnatural” for our human species. Taking a page from Paleo she implored the other lady to “think about it: before industrialization, and way back thousands of years ago, people didn’t have ovens and microwaves and they didn’t have societal obesity and weight issues either.

“Food for thought,” she told the other lady.

I almost spit out my coffee in laughter at that comment.

But this is what passes for “intelligence” these days and I guess “on the surface” it sounds intelligent, if you know nothing about real nutrition science and evolutionary biology.

And maybe I should have asked them what was in their Styrofoam coffee containers, because before the discovery of “fire” humans couldn’t have had a hot beverage, let alone enjoyed one. Surely whatever they were drinking must be “unnatural” for her.

But I guess blindspots exist — and exceptions can be made. But this whole ridiculous conversation I overheard sparked my desire to write this article. 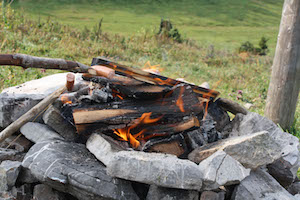 The Realities of Cooked Food

I remember first doing research on humans and cooking way back in the 90’s. Certain industry platehead magazines were capitalizing on the exploding protein shake industry: with MET-RX and all the rest. One of the first arguments was about how cooking “denatures” protein and renders it less useful in the body. And of course –> their own ‘processed-made-in-a-factory-protein-powder’ was far superior! Then on the heels of this argument were the tree-huggers talking about eating “dead protein” as if this somehow was an argument against human biological omnivore proclivity to eat meat.

So I decided to do some “real’ research on the subject of cooking food. And once again, human evolution seemed to be a key in the argument.

The reality in the research paints a much different picture regarding humans and cooking our food:  Several researchers have argued that it’s cooking that actually made us human. It was in fact the invention of cooking that improved the diet of human ancestors so drastically, that it increased their brain power and that this elevated them above all the other primates. (read that sentence over again!) The human brain, as well as the body itself – evolved through the medium of cooking food – and the human brain and body remain to this day – deeply adapted to a diet of cooked food. The rest of this ‘raw foodist’ stuff and other arguments to the contrary is just noise and babble.

In fact, our most important adaptation to cooked food has been our massive human brains which never would have advanced and evolved this way if not for cooking of our food. Our huge primate brains showed a preference from the beginning – an innate wisdom if you will – for cooked food. Our bigger brains have what is called “a biological affinity” for it. That’s why our ancient ancestors knew a good thing when they tried it; and after their first taste of cooked food – they never looked back. And likely neither can we: Our evolved brains simply don’t want to.

So the first message you need to heed is that the human species is biologically adapted to cooked food. This runs counter to so many modern diet zealots who preach that cooking food is unnatural and unhealthy and that cooking amounts to “processed” food. Nothing could be further from the truth.

So keep this argument in mind then as well. Yes, cooking is a form of processing to be sure; but cooking also made our brains evolve into the human form we now know. Therefore, food processing – at least in this manner, is technically “natural” for our species. And it is arguable that this is just as “natural” for other recent forms of processing as well. This isn’t a popular view especially among holistic diet cults: And I am not advocating a diet-strategy of processed food here either. The argument here is simply that it is not “unnatural” for us to cook food: But of course some modern methods of processing make some food questionable for consumption to say the least; especially for people seeking maximum health and well-being. And frankly there is simply too much of it (processed food) available – and that part of the equation ‘is’ unnatural for us.

And of course if you eat food that comes to the window of your car or worse; then you obviously are not eating for anything even resembling a maximum health benefit. But it’s foolish to claim all forms of processing are evil and bad, unhealthy and “unnatural.” Such foods need to be considered on a case by case basis. This approach to demonizing all processed foods is often labeled as “naturalism” – as if what is good to eat is unprocessed food and no exceptions. And not only is that untrue, it’s just not realistic if you live in the real world. This fear-mongering among those Diet-Gurus who call themselves experts and who label their way of eating, as the one and only true “religion” of “right eating” – well it all needs to stop.

All of these modern vanity diet religions love to imply that humans are meant to eat a specific way. Usually this implies eating as close to “natural” food as possible. But what is natural, also must consider the group culture as well; and this is again true for all mammals. Think about it: Deers for instance are herbivores. Therefore it would be completely “unnatural” as part of the group of deer – to have a deer who eats other deer. That would be “unnatural.’ Similarly, a lion is a carnivore. To have a lion who won’t eat meat, be a part of a pride of lion’s would also be ‘unnatural’ to its species group.

For human beings, meat eating and cooking are as natural to us as language is: language being another ‘evolved and distinctly unique’ human characteristic. Therefore, it can easily be argued from this perspective of sociobiology and evolutionary biology; that a human eating only as vegetarians is unnatural for our particular mammalian species: And eating only “raw” food would be equally unnatural.

Moreover real nutrition experts and academics do NOT advocate raw-foodism. And a typical survey of those so-called experts who do advocate “raw-foodism” shows these zealots are about as likely to have “real” nutritional accreditation as a fast food restaurant manager.

And to that overweight lady in the coffee shop clutching her new found nutrition bible of “raw food” –well she needs to know that more than 99% of people who “go raw foodist” eventually go back. And most go back because they end up getting sick on the raw food agenda. Talk about a phase and a fad.

But these upfront benefits of immediate weight-loss everyone who eats raw experiences and brags about upfront – this usually quickly turns into psychological and physical consequences – like extreme lethargy, apathy, EXCESSIVE weight loss (which sounds good but isn’t) gastrointestinal issues, headaches – and worst of all – uncontrollable hunger and craving issues that weren’t present before – and that often lead to bingeing problems etc.

You need to embrace and understand that cooking food is natural for our species. It allowed us to thrive and survive.

And going “raw” is not only UNNATURAL… it’s far more dangerous than a diet of all fast food!