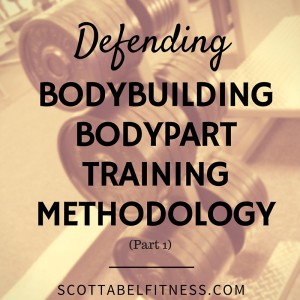 I think it started out innocently enough.

Over a decade or so ago, functional training entered the picture. Arguments were made regarding the benefits of kinetic chain expression exercises and doing exercises that expressed function in order to enhance athletic performance. As per usual in the fitness industry there was an overreaction to all things “functional” at the time. Everyone embraced it and its offshoots of muscle imbalances, corrective training and all the rest.

Critics of functional training made relevant points as well. Some experts advocated pure strength training to enhance athletic performance—by pure strength training, I mean training for limit strength more or less, that is, using the traditional barbell movements of bench, squat, and deadlifts, and power cleans. And then of course various Olympic Lift variations also became widespread practice as well, because of course this meant, “powered from the ground; driven through the core.”

On both sides of these arguments there were and are relevant points that are valid to this day. And as much as there seemed to blossom two schools of thought — functional training vs. traditional strength training — the one thing both camps seemed to have in common was criticism of old-fashioned bodybuilding bodypart training. I’ll even admit that to a certain extent these critiques remain valid too!

But over the years this critique of traditional bodypart training has spiraled into something else. No matter what I read now, it seems vogue and safe to take pot shots at bodybuilders and bodybuilding training, even suggesting that those who do it clearly just don’t get it.

I take umbrage at such a trite suggestion. It’s silly and it’s misinformed. I’m going to take some time here to give bodybuilding bodypart training methodology the defense it deserves. This will probably be written in two parts.

Paradigm Blindness in the Fitness Industry

Paradigm blindness in the fitness industry is nothing new. It seems like it is always the way this industry goes – more about “vogue trends” than real science – even though many of these vogue trends hide behind the science. But to my mind, one of the greatest dangers out there for any true expert is in becoming locked into one single particular way of seeing things and doing things.

Application of expertise is about seeing, knowing and embracing subtleties, nuances, and distinctions that so many other people miss because they have a single “one-way-street” approach to “their way” of doing things.

Many people talk about expertise as both art and science, but then forget the former when it comes to how they do things.

It just seems completely arbitrary and biased to me to praise pure limit-strength training as a goal, or present it as “the” goal, but then denigrate and insult trainingfor physique development as a goal.

Why can’t physique development as a goal be as equally applauded as building strength? Everything I read implies that strength training experts are the “real” experts and everyone else should just fall in line. And, more than that, bodybuilding training methodology experts — well no one takes them seriously, don’t you know. I know one thing for sure.

Working to acquire an aesthetically balanced and pleasing well-developed physique is much harder from a program design standpoint than is strength training program design. Context is everything! Relatively speaking, I find strength training program-design to be more like checkers, and program-design for balanced and complete physique development to be more like chess. There is far more nuance involved with creating a balanced physique than just knuckle-dragger expressions like “get strong to get big.” What puzzles me even further are these strength experts who now present themselves as physique-development experts, while out the other side of their mouths, they are more or less trashing everything about bodybuilders and traditional bodypart training (i.e. all the things that will lead to bodybuilding success).

I’d like to address some of the more consistent arguments I come across from strength experts when it comes to references made to bodybuilding/bodypart training:

“Bodybuilding workouts are organized so that isolated muscle groups, not movement patterns, are trained.”

These aspersions represent paradigm blindness among those who cling to them. It’s akin to throwing the baby out with the bathwater. There are dozens of good, solid reasonsto take a sound “body-part” approach to training methodology. Training movement patterns is great too, but one doesn’t have to cancel out the other.

In that sense you could argue that training for bodybuilding, not to mention the art of peaking a physique for a contest, is much more cerebral in nature than powerlifting or strength training. Now, is that a fair statement just because I say so? No. Certainly not. But it’s just as arbitrary as making the bodybuilder or bodybuilding training the comical punching bag commentary in powerlifting and strength training circles. It’s a bunch of macho bullshit, no matter who is throwing the rocks. It reeks of jealousy and pettiness.  I’ll get to that more next week.

I’ll offer you this specific example as well. When criticizing functional training methodology the barbell training experts say this:

“The similarity in movement pattern between sport movement and the squat is utterly irrelevant. For instance, the squat’s ability to develop strength is the relevant criterion for its inclusion in the program.”

This kind of statement has been made by Mark Rippetoe, Dan John, and others.

But this very same thing can be said of so many traditional “bodypart bodybuilding exercises” as well.Strength and strength density can be developed in a number of ways from a number of different angles, ranges and planes of motion. And these exercise inclusions could also “translate” into better athletic performance. To pretend otherwise is pure paradigm blindness.

The more open-minded approach would be for biased experts in strength or functional training or bodybuilding training to stop talking past each other like they are defending some kind of neighborhood turf or something. The more intelligent approach should be to be more “inclusive” than “exclusive” of these other training methodologies and blend them into hybrid forms of programming.

This is what modern bodybuilding training does more efficiently to my mind. This old bias of “you have to hate and denigrate chocolate, if you love vanilla” makes no sense. Instead of one or the other, why not both, or all? There is a much bigger picture to consider here.

And for the record most intelligent bodybuilders also do squats and deadlifts and other variations training off the ground and incorporating movement pattern considerations as well. I know I design my physique development programs with these things in mind.

Next week I'll talk about the more over-the-top statements made about bodybuilding training.