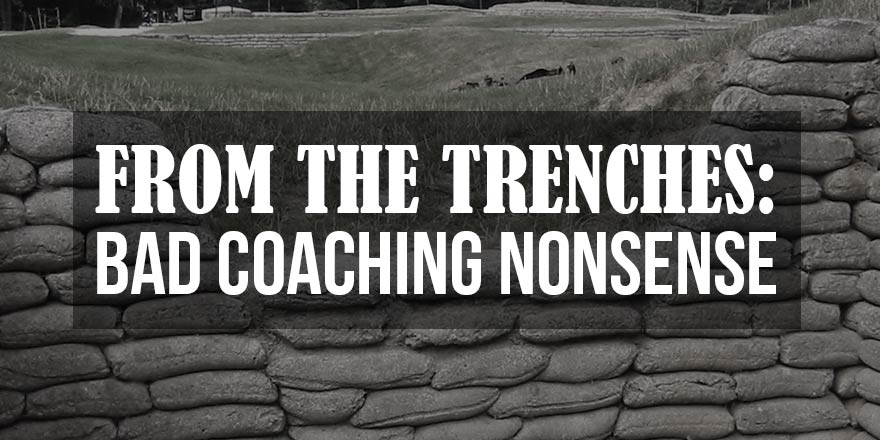 From the trenches: bad coaching nonsense

I’m going to give you a real-life case study below.

But first, let’s face it.

There are more bad Coaches than good Coaches in this industry. That’s the fact of it. It seems every person who has won some kind of physique contest now feels “qualified” to Coach other people, usually with the “just do what I did” mentality. Many of them have no understanding whatsoever of individuality and nuance. Then there are the ones who think that a bunch of certifications in weight training qualifies them to Coach people who have real struggles with food, eating, body image, the mirror. In these cases, things usually only get worse.

As I always say, “certified does not mean qualified.”

There are many, many factors that go into being a good Coach. To be a GREAT COACH, there are even more factors and nuances that extend well beyond a working knowledge of nutrition and how to perform obscure exercises.

To my mind, the first principle of even the most basic level of good or even just “decent” Coaching should be similar to the Hippocratic Oath: “above all, do no harm.”

Sadly, this doesn’t exist in the trenches of those pretending to be Coaches out there. Many of these Coaches don’t even know what “harm” is, as they are the ones causing it, as you will see below. They have no knowledge or ability of how to read a client’s biofeedback and what that biofeedback is telling them.

The scenario that's been created is due in part to consumers feeding this, though often through no fault of their own. Many people who want and desperately need a physique transformation have had no real background in individual or in team sports of any kind, so they don’t really have any notion of what a Coach is supposed to be and how it is all supposed to work. To many consumers looking for help, if someone has a great physique, or has maybe “competed” and done well in a physique contest, then to the naïve consumer this seems to “measure up” to pass for qualified Coaching.

Most contest prep coaches have never even studied coaching, or studied things like social work or counselling or anything else that might help. They win a contest or get a degree in nutrition or kinesiology and hang out a shingle online that says “Coaching” with no real experience or background in any of the elements that should matter in such an important endeavor as working with people and working on their bodies. What most of them do is assign to their clients whatever training and diet their own Coaches gave to them. Then they call that “coaching” and they call themselves “a coach.” What they really represent is the lowest form of “monkey see, monkey do.”

Here is an example of “bad-Coaching” that is unfolding as I write this:

(Note: If any of this sounds at all familiar to your own situation… FIRE YOUR COACH and run the other way!)

They started going over her physiological and emotional state during her “prep” for this photo shoot that, at the time, was still five or six weeks away.

This lady feels extremely weak all the time, she’s beyond hungry, often to the point where she can’t sleep because of it. She has pounding headaches, and her blood sugar levels regularly drop so much that she feels shaky, as though she were on the verge of passing out at any moment. She has dizzy spells (likely orthostatic hypotension) and suffers from what I have often called diet-induced ADD.

Several weeks ago she went to her Coach and started reporting all this biofeedback. Her Coach nodded about them then weighed her in. She hadn’t lost any weight in three weeks running so he dropped her calories again (!), and increased her cardio (!) in both time and frequency, now up to every day, and sometimes even twice per day on top of her training (!!!).

The obvious thing to me here as a REAL Coach is the way this coach has totally and completely ignored all of the really important biofeedback at this point. Her body is trying to communicate with her. Her body is trying to warn her. It is letting her know that physiologically she is in dire straits. Now it’s one thing for a trainee to ignore crucial biofeedback, but it’s inexcusable for a Coach to do so! Again, this lady’s biofeedback is her body’s way of pleading with her to pay attention to the fact that something is very wrong.

This so-called coach, instead of heeding the importance of this biofeedback, put the weigh-in as being “more important.” By the way, this is another indicator of complete incompetence. There is no other way to say it. Just because things are not moving on the weight scale doesn't mean the body is not responding. Using the scale as the only tool you pay attention to screams “incompetent.”

Her Coach has her dieting for a photoshoot that is still weeks away and her body is falling apart. This lady isn’t going to make it five weeks. No way. Her so-called coach has paid no attention to the dire biofeedback outlined above, and also mistakenly perceived no change in weight as meaning that her body was not responding.

The sadder thing here for me is about what lies ahead for this lady.

Given these “classic” biofeedback indicators of metabolic, hormonal, and biochemical distress… she is in for a drastic rebound of weight-gain and added bodyfat down the road. There’s no doubt about that in my mind. That's how the body works.

Here is a scenario where a client goes to a coach she trusts and states her biofeedback. The coach, instead of recognizing that the client is approaching burn out metabolically and physiologically, ignores all this. In the span of six weeks, she dropped the client’s calories and increased her cardio, even doubling it several days per week in order to “get the scale moving again.”

Finally the scale did indeed start moving again. To that I say, So Fu$king what! Just because the scale starts moving again doesn’t mean this person’s body is surrendering the right kind of energy. Aside from the fact that losing muscle instead of fat won't help her look any better during her shoot, it'll also cause even more metabolic compensation.

This ridiculous “coach” thinks the added cardio and absolute deprivation calories “worked” because the scale started moving again. In the short term the scale moved in the desired direction, but at what expense? This person was already burned out and is not functioning in a healthy way. So this coach assigns more physical stress to her body in the form of added exercise and further calorie deprivation. Use some common sense here, folks, and you tell me how you think that is going to play out over the next 6 months or so?

Based on my past experience with these coaches like this, as soon as this lady’s body starts rebounding, the most likely outcome is the coach will ditch her and tell her she isn’t disciplined enough or whatever. Again: monkey see, monkey do. “Well my body didn't react so negatively, and I never binged or experienced any of these supposed symptoms.” To that I say: Yes, your body is different! Your body's reaction to the initial diet was already different, relative to your clients', and then you made things worse for the client by cutting her calories and upping her cardio even further. Of course her reaction now is completely different to what yours was.

After blaming the victim, the coach is likely to move on to some other willing guinea pig.

This poor lady’s vital stats of age and weight don’t help her here either — something else this so-called coach failed to consider in relation to all the obvious biofeedback warnings. Her body is about to go through hell and likely for a long-time. Her coach is more than partly responsible. However, this lady is not completely free of responsibility, either. When you put appearance first at the expense of health and well-being, what do you think the consequences are going to be? As I always say, you choose the behaviour, you choose the consequences.

Based in the biofeedback this lady’s own body was telling us, she should have had her cardio cut in half, not doubled. She also needed a refeed, for sure. She should have been given 2-3 days completely off her diet regimen, and maybe even her training as well, instead of having her calories cut more and more each week. Both the client and coach ignored the honest and essential biofeedback her body was providing which would inform any good Coach what to do next. And unfortunately – she is going to suffer the consequences of that and likely end up blaming her body when it all unfolds. And yet, her body has been trying to warn her and protect her for weeks.

Bad Coaching is more plentiful out there than is good coaching – and great Coaching is rarer still. More’s the pity in that.

That’s my rant, because this nonsense deserves to be ranted about.