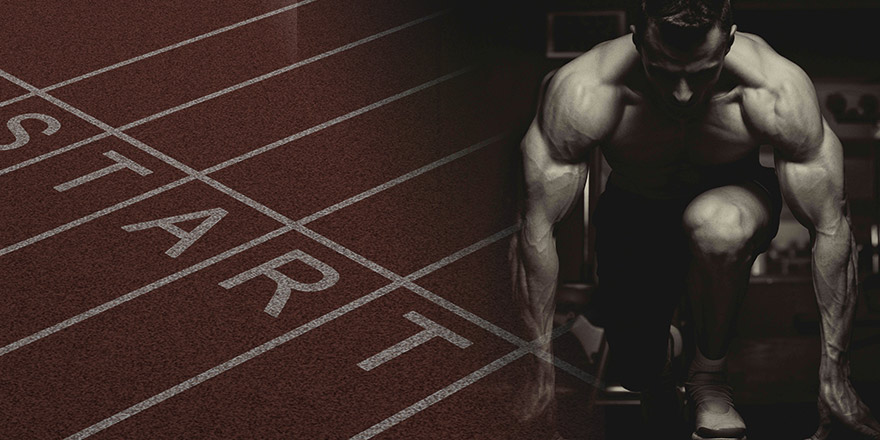 If your goal is aesthetic muscle gain and physique development—without the crutch of steroids—then there are three general, high-level reality checks you should never take for granted.

Progress stalled? Any single one of these three points could be what’s really holding you back.

Reality Check #1:
You can’t out-train a poor or inconsistent diet

Most people “know” this, or they’ve heard it a thousand times.

I’ve received many, many emails over the years from people who assume that following their diet-strategy about 80% of the time should be good enough to achieve their physique goals. (Never mind the question of what’s going on during that other 20%.) Yeah, yeah. They know they aren’t perfect, but surely they’re close enough, right?

I find that people caught in this way of thinking end up believing they need a whole new diet because the current one just isn’t working. In reality, the truth is they just aren’t being consistent enough with the perfectly sound diet-strategy they already have in place.

For many people, the problem is the weekends. They can stick to their diet-strategy from Monday up until Friday, but come Friday night? Their diet compliance and consistency goes out the window until Monday morning — and then they can’t figure out why they aren’t making serious progress.

This is often justified with a false belief pattern:

“Well, after a hard work week, I deserve a dinner out, or a day off my rigid diet.”

Look, this may be true psychologically, but that doesn’t mean it’s true physiologically!

Your metabolism may not be in a place where this kind of diet inconsistency can be tolerated without cosmetic consequences.

I repeat: what may be true psychologically may not be true physiologically.

And what about all these social events on your calendar?

Well, what about them? As I always say, “Choose the behavior, choose the consequences.”

If you want to choose to indulge in every birthday, anniversary, holiday, and social occasion that comes up, that is fine. You're allowed to do that. But along with that choice to indulge you also choose that the consequences — positive or negative — that may impact your physique goals.

It can be frustrating if you know someone who can have those indulgences without any seeming negative physiological impact. (I'll return to this idea in point #3, below.) For now, let me just say that the reality is that someone else’s metabolism or body can “get away with” is not the same as your own body's physiological realities.

In might just be that a greater level of consistency and compliance are what it's going to take. Embracing that reality and moving on is how you move forward.

When it comes to training, everyone has workouts they prefer to do. But that doesn’t always translate into being what a trainee needs to do in order to keep the physique adapting to new stimulus.

Many trainees understand “adaptation” in principle, but they ignore what it actually means in terms of proper and ongoing application. If ongoing cosmetic physique progress is your goal, then an objective assessment of the best training approach for you, at this moment in time, should always take precedence over personal preference or comfort zone.

I’ll give you a couple examples.

“Hey Coach, I’ve been on [PROGRAM] for a few years and I never go below 10 reps for any exercise. I made great gains before, but the gains have stopped. What am I doing wrong?”

Well, you aren’t doing anything wrong in the training room, per se, except that your body has adapted to the program. A mild tweak here and there isn’t going to cut it.

And when those programs stop working; well, what you do next should be a matter of assessment, not just personal preference.

The flip side of this mindset, of course, are trainees switching things up too often. In cases like this, what they’ve “always done” is flip flop from program to program, so they’re not actually adapting to any single one of them.

You adapt to a program, and then you move on to something to build on your progress; you don’t just jump around without ever adapting!

A mix of the two mindsets is the trainee who has been doing something for a long time, and they do try something new… but they’re own personal preferences make them impatient, and so they return to their old way of training before the new style has had time to cause any kind of adaptive response.

A common example is the self-described “hardcore” trainee.

He writes me and tells me that he “loves training heavy” and “moving heavy $hit.” Only problem is he’s  stopped making gains (and maybe his joints hurt). Can I help?

So I do an assessment and based on that I assign him a higher reps protocol. He doesn’t outright refuse, but it’s only a few weeks later when writes me back to say, “I don’t like training this light. It doesn’t feel right. I need to train heavier and go back to heavier weights.”

No, he doesn’t. He needs to let the higher-reps program does it work. His feeling that he “needs” to go back to low reps work is just confirmation bias.

Reality Check #3:
Compare, Contrast, and Compete is a Losing Proposition

Your genetics are yours and yours alone.

If you want to follow other trainees on social media because they inspire you or because you know them personally, then that is just fine.

But if you are always comparing your progress with someone else’s, or questioning what you are doing based on what someone else is doing, you’re only going to get sidetracked or stalled by doubts creeping into your mind.

This constant comparing, contrasting, and competing only leads to doubt, frustration, and jealousy. That is hardly the mindset that produces a positive (i.e. sustainable) ongoing personal experience where you can enjoy the journey as you build a physique.

This is related to reality check #1, above. Comparing what someone else’s metabolism to your own—what someone else can “get away with”—can lead to frustration, envy and sense of futility (and those thoughts of “I deserve”). These aren’t helpful.

Your journey is your own to embrace.

That is the beauty of pursuing this physique transformation goal in the first place. It can help build you up internally as well as externally, but you will sabotage this aspect of it if you get lost in the compare, contrast, and compete game.

(On a somewhat related note, let me add that it’s also not about beating a training partner into the ground either. Only small egos need to do that. It’s also not about a personal trainer working a client to exhaustion, and then patting themselves on the back for doing so. None of that has anything to do with an intelligent approach to constructive and productive training application.)

The fact is that good or bad genetics for building muscle—or for metabolism—are very real things. Almost all trainees progress at different levels and at a different pace. If you focus on the person with great genetics, you’ll get frustrated.

Think of it like the 100-metre dash. People with the best genetics for physique development don’t line up at the starting line; they line up 20 to 30 meters ahead. They have a substantial head start to reach that finish line faster and easier than most normal trainees.

Most of us with average or normal genetics line up at the starting line. And we’ll encounter obstacles on our path that the genetically gifted won’t have to deal with. For the trainee with average genetics, the path toward the finish likely won’t even be straight, either.

And then, beyond that, there are trainees who don’t even have “average” genetics for physique development. You know, the classic ectomorph getting sand kicked in his face in the old muscle-building ads in the back of comics. Or maybe, it’s the person with narrow clavicles, wide hips and endomorphic pear shape.

These types of trainees, line up 20 to 30 meters behind the starting line. They can still get to the finish line—and when they do, it’s even more impressive—but they only get to that finish line by adapting an attitude that will not be denied progress.

If they start focusing on the genetically gifted, they won’t adapt that attitude. They’ll just get deflated. To make progress they just need to focus on their own lane and go and, as I said, refuse to be denied progress.

So, if you’re focusing on others’ progress, or what other people can get away with, you need to stop. That’s holding you back. Re-frame and re-focus on your own journey.

Reality Check #1. You can’t out-train a poor or inconsistent diet.

Reality Check #2. You need to consider major training changes from time to time.

Reality Check #3. The compare, contrast and compete game will only poison and sabotage your own journey.

Physique development and a fitness lifestyle can be an amazing journey—or it can be a hellish experience that leads to quitting, giving up, and feelings of resentment.

For the modern trainee (or for you trainers out there enlisted to help them) you need to keep these reality checks in mind. If you never take them for granted, and you always keep them in the forefront of your mind, these 3 simple reality checks will light the path of your fitness journey and keep you on the straight and narrow of what it takes to make constant, real-world progress.