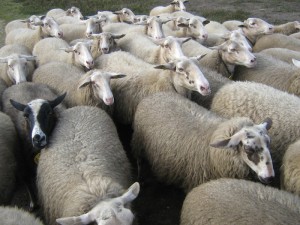 This helped me to develop a thick skin, which I've found necessary to have if you want to stand out in this industry and go against the grain, if and when your gut tells you to. Robert Kennedy took me under his wing in many ways. He saw something special and unique in me. and he loved my writing. He also taught me some valuable lessons about the realities of being in the public eye, especially in this industry. I was pretty young and naïve at the time.

One day I was whining to him about some blowback I was getting over an article I wrote.

How could people not see how wonderful I am and how right I am? I must have been whining about.

Bob had no patience for that kind of stuff. We went next door from the Musclemag offices for lunch. He set me straight. He told me, “You have two problems right now that you better get over quickly,” he told me. He explained that there were two types of people: Shepherds and Sheep. The sheep will always outnumber the shepherds. Yes, he said I was a shepherd, but the next thing he explained to me is that I need to be aware that there are different kinds of sheep – there are those sheep who want to be told what to think and they will follow; which is the majority of consumers. Then he said there are the more dangerous kind of sheep: the ones who “think” that they are shepherds, but really they still just follow whatever is popular and vogue. These ones can often bleat the loudest.

Of course the most dangerous sheep of all aren’t sheep; they are “wolves in sheep’s clothing” as the saying goes. What he went on to explain to me here is that there are people who just want to attack shepherds and their flock for whatever reason. These aimless wolves don’t know how to stand for anything, so they are the ones who tend to fall for everything.

He told me the ones who want to talk the most tend to have the least relevant stuff to say. To sum it up he told me that the fitness/diet industry works like many other ones, and that the fact is there’s a bigger real demand for sheep, than for shepherds.

Think about that. That is true.

I have seen through experience that there are more people making serious money “from” the diet and fitness industry, than there are making serious money “in” the diet and fitness industry. That is a shame. The creator of Paleo, or Dr. Atkins for example – these people make substantially more money than “the registered dietician” or author of a university nutrition text. I’ve seen the same in the training world as well. Marketers make more money than true experts seem to. Because they herd sheep.

In every profession and industry the problem at the top that has a trickle-down effect is that there are only a few deep thinkers, and way too many sheep thinkers. H.L. Menken said (and I’m paraphrasing), “the people consumers admire most extravagantly tend to be the most daring liars; and the people consumers detest most violently are those who try to tell them the truth.”

I never forgot the conversation I mentioned with Bob. It helped mold my perspective moving forward. I often wonder what Bob would have felt about modern social media where hate and reaction and striking out against others by “swarming” seem to be the norm. I have recently experienced this myself on my Coach Scott Abel Facebook fan page and I want to share with you some of my observations about this experience.

It’s a sad sign of the times when people get more hostile and offended when you upset their belief system about diets, than if you attack their actual religion. Many diet-industry journalists have written about “diet cults” and you don’t have to be a detective to see how true and pathetic that reality is. Recently on my FB fan page, where I always try to share knowledge or wisdom and my 4 decades of experience, I have been making regular posts about “keto diets.”

This is the worse diet approach I have WITNESSED in my 4 decades of experience working with people. The most messed up metabolisms and weight-rebounds I have seen in this industry are always associated with a previous attempt at a keto or very low carbs diet. So, to say I have “an opinion” on this would be an understatement. But my opinion is an informed, educated, and experienced one. You don’t write as many books as I have, or have as much success in physique transformation as I have had for 4 decades, without doing your due diligence in research and observation.

I have been making short FB posts the last month or so, with research citations most of the time, regarding “keto diets” and why they are so dangerous and so unnecessary (medical reasons aside). Well, one of my posts drew the ire of keto followers somewhere and they swarmed my FB fan page with all kinds of ridiculous and vicious comments. The comments were so over the top and angry and hostile that I had to actually delete and ban several of the people who posted there.

You would think I had just gone to some popular Catholic website and insulted the Pope, or called Jesus names. I mean the response was ridiculous. Diet cults indeed. Very few of these mud-slingers bothered to check my credentials, or any of my past posts, obviously, before calling me a number of names and accusing me of all kinds of things (being “an uninformed moron” among them). Hmm, is it possible to write over a dozen books, have a graduate education where I won several scholarships for academic performance, to last 4 decades in a “prove yourself” industry, all while being “uninformed moron” at the same time?

I think of the idiom often attached to religion. The one that says, “to those who believe no explanation is necessary; and to those who don’t believe no explanation will ever be enough.” This speaks directly to diet-cults. I try to present the truth from the perspective of research AND experience. And I also try to warn people based on 4 decades of experience seeing what happens when people follow the herd.

The fact is my methods have stood the test of time. You only have to go back through these blogs to witness some recent transformations: healthy and sustainable transformations. I have gone against the industry trends many times and time ended up in the right, long after this or that trend gave way to something new. But it is not always about being right, so much as it is about doing right. Speaking out against keto-diet nonsense is just the right thing to do, regardless of where current industry vogue trends may be.

But after swimming through that swarming attack wave on social media last week I had another sad observation as well. Now I understand why teenage internet bullying is such a cultural problem and why teen depression and suicide is skyrocketing because of it. Teenagers’ minds and character aren’t developed enough at that age to endure the kind of viscous swarming attacks that I witnessed on myself last week. That is a sad thing to think about.

Intelligent and mature people should lead the way and model the decorum they expect others to follow. An open-minded polite discourse, a tolerance for differences, a healthy respect for opposing points of view must replace an eye for an eye lowest level of rudeness, intolerance, extremism, information-twisting, character assassination and polarization of “us versus them.” GROW UP and grow beyond a need to retaliate to twits.

So, if you have a social media page with any kind of following – and if you are here on my blog page or my FB fan page because you respect my input on various subjects – then I implore you to conduct your social media persona with class and decorum. Let the crass and vile find their place somewhere else. Rise above. Tolerate well-intended and well-thought-out critique, but ban and delete insults and vile comments on your page – even if aimed at someone else. Honor the medium of social media, don’t debase it.

And yes as I always say: social media is not a democracy when it comes to your own page and who can be accepted there and what kinds of things will be tolerated. I delete and ban all people who make vile comments or vicious attacks on my page; because it is after all my page. And at my age I have earned a certain level of respect and I won’t tolerate anything less than a display of decorum. People can disagree with me. That is fine. If so, post your own credentials, rather than some “study” you haven't even read fully that you think proves you are right. I deal in the trenches of real-world scenarios with real-people that need my help and welcome it.

Research informs me; it doesn’t dictate to me. Like I said, my stuff has stood the test of time, not here today gone tomorrow chasing the latest internet trend.

As Warren Buffet said, “if you keep following the herd you end up spending a lot of time scraping your shoes.”

I will get back to more interesting topics next week!