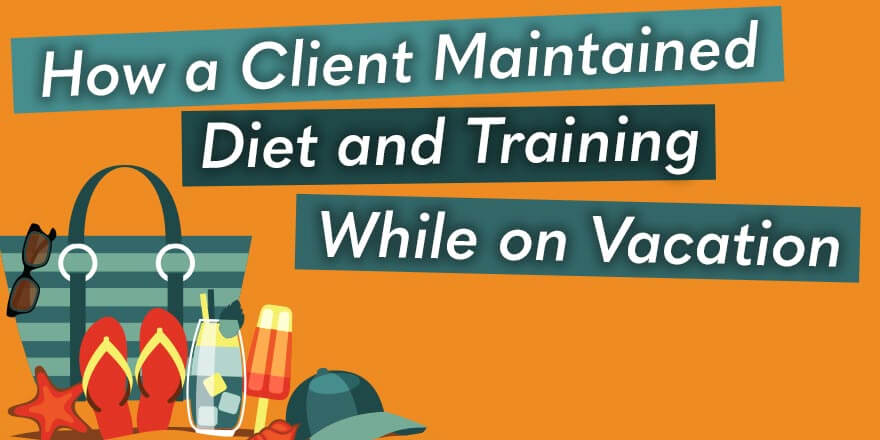 How a Client Maintained Diet and Training While on Vacation

People often have a tough time sticking to a fitness and diet regimen when traveling.

The problem is often that people take an all-or-nothing approach to travel. Either they surrender experiencing ANY of the “fun” of travelling, or they give up and go way off the diet and it turns into a two-week-long binge or something like that. This can be especially dangerous because so many people then find it difficult to get back to a training and diet regimen once they return to their normal lives again.

The solution, based on that last paragraph, might seem obvious. And it is! Go for the happy medium.

Below, I want to show how a new client (“Eric”) nailed his diet and training because he found that happy medium.

Note that Eric does NOT have an extensive background in diet and fitness. Still, he nails it. Why? Because it’s not rocket science. It’s simple. (Maybe not easy, but simple.)

….and greetings from Hanoi, Vietnam!

I’m currently on Week 14 of the 6-Day Strength hypertrophy program.

I’ve been on holiday since beginning last week and hosting my parents in Singapore, so I was out with them most of the days. Since Friday we’ve been travelling to different South East Asia countries.

I managed to complete all the workouts last week, including one on Friday at 03:30 AM at a 24 hour gym, and Saturday at a really old-school gym in Malacca Malaysia that charges less than $5 for a day pass.

My training intensity throughout the week was still good, so I’m glad I continued training during the holiday break.

My meal and sleep timings have been very inconsistent due to the travels.

I’ve had between three and four meals a day, though sometimes those days were stretched over 20 hours. On most days, one of the meals has consisted of 1-2 apples, 1-2 oranges and 1-2 handfuls of almonds. The other meals have mostly been restaurant meals, which have been more difficult to get right than I thought it would be, partly because of the large group that we’re travelling with, and me compromising by agreeing to eat at normal restaurants. At these places, I’ve ended up having salad and soup quite often. Otherwise, I just pick what looks unprocessed and vegan.

Despite the odd miss—lots of crispy-anything deep fried things in Malaysia—I've had some really good dishes.

I have no idea exactly how much starch, legumes and veggies I’m having, so I’m relying more on biofeedback than before, i.e. if I feel like I have been distractingly hungry throughout the day and I’m at a restaurant with a good variety of vegan food, then I’ll really dig in and eat as much of the unprocessed veggies as I want, while having larger servings of rice (1-1.5 cups) or potatoes (2 potatoes), when available. This happens every second day or so. With other meals and days I think I’m under eating a bit.

Overall, it’s a bit difficult to gauge exactly if I’m over or under eating. I still have high but mostly tolerable hunger levels between meals, and wheneve it became intolerable I would just have a quick meal of fruit of nuts.

There has been three or four indulgences where I would have a bite of a local speciality dish or drink that I knew had sugar or similar in it. I originally saw it as experiencing the culture, but I’ve noticed that I’ve started to try and justify other indulgences as well (“it looks really good, and I’m only going to have a small bite”). Before going further down the slope I’ve stopped the indulgences cold.

This week has seen the first training programme disruptions. Monday and yesterday I have not been able to go to a gym, so I’ve been doing hotel room type workouts instead.

Monday, with my training day being chest and quads I did three sets of full quad blasts, followed by the 200 pushups split over sets of 10-15 reps, with 10-15 seconds rest between. I haven’t done heavy metabolic work in ages, and we’re walking about 16 km a day, so I was hesitant to do extra quad blasts, in case I ended up crazy stiff in my legs. My chest and legs are fine, so I think I could have pushed it a bit more.

Tuesday morning being back and hamstring focused, I did 5 sets of 20 wide reverse grip pushups, the ones that targets the side-lower lats. I then did one arm suit-case rows (with about 15kg of luggage) while standing on a low foot-table for full range of motion for three sets of 15. I followed this with four sets of two suitcase rows from the same table. My girlfriend's suitcase was lighter than mine, so I just swapped suitcases between rounds. I then did three sets of the BW one-legged pistol squat, deadlift, reach lunge and forward foot reach sequence, as on your YouTube channel for three sets each side. And last I did three sets of weighted forward reaches with a filled 1.5l water bottle. Hamstrings are fine, but my lower lats are quite stiff—that pushup variation targets them extremely well.

Judging by how I’m feeling now I think I actually undertrained on both days. The workouts were quite quick, between 30-40 minutes. Today (arms and shoulders) I’ll be able to go to a proper gym, so I’ll just do day three of the programme. I’m not sure if the gym will open early enough tomorrow. If not, I was thinking of doing the quad blasts for four rounds this time, and different pushup variations (feet on bed, etc), with the aim to stretch the workouts over 40 minutes.

On a personal note, having my parents with me on holiday has been a real eye-opener. My dad has been close to overweight and fairly inactive since his mid-twenties. He’s been able to get away with it for a long time, but now that he’s 62 I can actually see his body is starting to struggle. He’s struggling to walk and his balance is poor, so he’s constantly at risk of falling.

My motivation for training and eating healthy has mostly been for cosmetic reasons, coupled with some vague long-term vitality goals. I have actually questioned whether I’m going too extreme. But now, having seen how your body will eventually struggle to keep up with an unhealthy lifestyle, and how it debilitating it can be, staying as healthy as possible is much more prominent in my mind, and motivation for continuing.

That’s it for me this week. Thank you for the coaching you provide.

So, to review, here we have a client traveling FOR VACATION for an extended period of time. He’s travelling with a group, so it’s not like he can bend everyone to his will and have them wait for him while he finds a gym and works out, nor can he make everyone eat at some healthy restaurant at every meal.

But he did exceptionally well. This is how you do it in the real world. It’s not perfect, but you just make it work as best as you can.

Here are some of the key takeaways:

This is a common situation when traveling, and it just comes with the territory: jet lag, time zone changes, adjusting to a different bed and pillows, and unfamiliar surroundings.

(Research shows this affects people more as we age, by the way.)

What you want to do is be calm as you can be at bedtime, but if you can’t sleep then don’t fight that either, just stay up and engage in anything that calms your mind. Watch TV, read, whatever. If you can, try to set an alarm and get up at the same time of day each day. It’s all part of trying to have some kind of modified system in place, no matter how rudimentary it may be. Do what you can, but don’t worry if it’s a bit off.

There really are no “musts” for this. If you are traveling with a group, you need to adapt accordingly and do what you can.

Getting this right is about having some perspective and operating maturely within that framework.

What Eric did that was really excellent was he was able to “go with the flow” while still paying attention to his own biofeedback cues. He balanced healthy choices when he could and when he wanted to, but there were also times to indulge and experience the culinary delights of the trip

I’m sure he could have used any number of “apps” on his phone to try to determine the perfect macro ratio or calorie number. He didn’t. He didn’t even really use his normal meal plan.

He was walking up to 16 km a day. He was getting workouts in when he could. Whatever number his phone could spit out would have been way off.

But biofeedback is reliable.

Instead of being a slave to numbers and letting that interfere with the flow of his vacation, he focused more on the question of “Am I hungry?” and “How hungry am I?” He used “tolerable hunger” as his guide!  If you read the email, you can see how Eric looks at biofeedback cues and then says things like, “I noticed this, so then I did this…”

Eric searched and found some gym facilities before and during his travels, but when he couldn’t make it to the gym, he just worked right in his hotel room.

Instead of beleaguering this point, here’s a quick circuit you can use yourself in any hotel room:

Cardio? If you want to go for a run, sure, but it is almost always easy to just go out and explore by walking and visiting the local sights.

As Eric said above, he was logging about 16 km per day just walking. And that always counts for something. When I travel I often wake up even earlier than usual and then just head out and walk.

Travelling is valuable. You can learn important things about other cultures and about yourself.

Again: there is no reason we have to take an all or nothing approach to exercise and diet strategy. It’s not about perfection. It’s about having a system in place that invigorates you no matter where you are, or what circumstances are directly in front of you.

Eric did an amazing job of keeping perspective.

He kept up a healthy eating and exercise regimen, but also keeping enjoyment of his family and his travels in mind as well.

THAT is a successful balance of fitness during extensive travel!